In a vain attempt to tone up, I recently took up aquafit at my local swimming pool.  In my mind's eye I look like this... 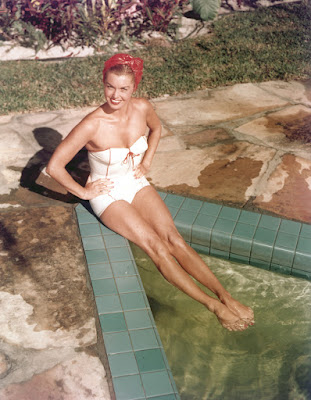 I admit that is Esther Williams but the effect is the same, honestly.  During my graceful/frenzied kicking, jumping and general thrashing about, I got to thinking about Victorian swimming. As you do...


Actually more to the point, I thought about Victorian women swimming.  We all know they did it, even Judi Dench does the doggy paddle as Queen Victoria in the film Mrs Brown,  but actually finding images of women in water turned out to be more problematic than I expected.  After all, why wouldn't a painter want to show a lady in her wet scanty costume...?


Okay, so Henry Tuke had his own reasons for concentrating on the beauty of the male form and produced some gorgeous images of swimming that are so bright and airy, you feel the summer breeze on your skin and can smell the salt in the air.  The Bathers above is a good case in point, as is Ruby, Gold and Malachite, both of which show young chaps having a lark near water, all without costumes (although Tuke was always careful about how much you saw).


If you have a look, there are images of women swimming but more often than not the women are stark naked.  Whilst I can just about believe that men shed their clothes to leap willy-nilly into any body of water (if you excuse the phrase), I find it a little harder to believe women easily shed the many layers of clothing just to do likewise.  A corset is not something you quickly pop in and out of.  Well, not intentionally anyway.


In the first part of the twentieth century, especially between the wars, there are some gorgeous images of women in swimsuits or posing by glimmering pools, all in a very 'health and efficiency' kind of way, all part of the new aesthetic of the active woman.  Although the Knight is utterly gorgeous, my favourite of these has to be this one...


Dating from around the 1920s, Spray  is possibly the most popular image at the Russell-Cotes Art Gallery, more so than even Venus Verticordia (which seems like blasphemy, but Spray is just so damn likeable!) and perfectly captures that jolly, healthy vibe.  It's not hard to image that either of the two women above is about to do some swimming then have a scotch egg and some ginger beer after a rough towelling off.  That might just be me.  I do make a great scotch egg.  Anyway, my point is that women swimming seems a natural (in many ways) pastime by this point, but what of Victorian women?


The Victorians were in favour of women learning to swim, or at least in favour of them wearing swimsuits.  The Sevenoaks Chronicle from 1881 reported that 'Ladies ought to learn to swim as much as their brothers or their cousins, and when in the water they may be privileged to wear pretty costumes small and light enough to display their graceful forms to advantage...'  It went on to report that the popularity of swimming competitions at Southsea in Hampshire might be healthy and Christian but 'where is feminine delicacy?' Looking at the above costume, I'd be surprised if you could find her feminine delicacy unless she has a special pocket for it.


The Star reported in 1880 that 'ALL WOMEN SHOULD SWIM' and said that although children of both sexes are timid of the open water, it was almost seen as a natural state for women to remain on dry land - 'swimming among the fair sex seems to be regarded as a most difficult and dangerous science'.  Half the problem, the paper observed, was the costume which was seen as restrictive.  The lady emerging from her bathing machine above shows how the earlier bathing costume lost its sleeves and rose to the knees in order for women to be freer in the water and swim without difficulty.  Yet still images of women in water did not tend towards the realistic...


For the Victorians there was only one reason for a woman to be in water.  Mermaids, selkies, sirens - all of them lurked in the shallows, called to men from rocks and generally led you a merry old dance before drowing you.  No wonder women were not encouraged into the water to swim, look at the mayhem they cause once you get them wet!


Ironically, mythological women in water are everywhere in Victorian art.  Look at Edward Burne-Jones and his mermaid fetish (see my post on the subject).  I would argue that there seems almost to be a distrust of women swimming, as if they are up to no good.  Do the artists fear being drowned as they are tempted to follow them?  Do they fear that if the women get fit and strong they might start asking for things like the vote and internal organs in the correct position?  Whatever it is, Victorian men seemed to want to treat Victorian women by the same rules as Gremlins.


If you are classical and all you want to do in water is splash your friend whilst you are both naked, I suppose that's allowed as long as we can all have a good look at you doing it.

The moment that you look like you can outswim us or that you are not terrified in the water, it will be assumed that you are up to no good. Shannon's pair look a bit suspicious, but he does do awfully good water, in such a tempting colour.


So, in conclusion, never trust a woman who can swim.  No, hang on, that's not right.  The Victorians seem to display a fear of women swimming but that might come from many different places.  The figure of the mermaid (other water-based temptresses are available) is an attractive and popular one and so the idea of laced up Victorian women being unlaced in order to bathe may have been seen as transformation.  Also, there is a degree of liberation, at least in terms of clothing, that has to happen in order for women to swim, and that has connotations of lax morals.  Yet again the person who is being stared at is blamed for drawing attention to themselves, and it is amazing how much power is projected onto the watery temptresses, for example Van Beers femme fatale above.  For the male artists of the Victorian period, women remained as mysterious as the oceans, neither of which could be fathomed.

Who know what would happen if you brought them together...

Posted by Kirsty Stonell Walker at 09:13