Review: Peacock and Vine: Fortuny and Morris in Life and at Work

"We were in Venice in April and I was drunk on aquamarine light."
(Peacock and Vine, p.3)

Since Possession I don't know any 19th Century fans who don't get a bit excited when A S Byatt publishes something that pertains to the Victorian.  Whilst I was not a fan of The Children's Book, I couldn't deny it had rich and immersive descriptions of Victorian artistic life down to the teacups. When I heard Byatt was publishing a book that involved William Morris I was naturally hyperventilating... 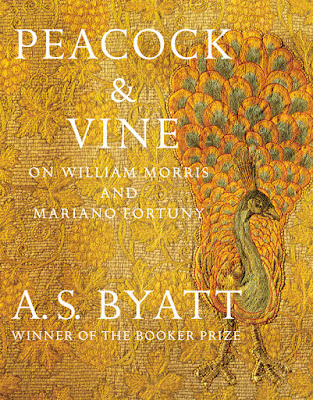 Not a novel but the musings of Byatt using the careers and lives of William Morris and Mariano Fortuny, men of 'genius and extraordinary energy' as Byatt describes them, to shed light on the nature of passion, pattern and inspiration. Described as an 'essay', the little book explores the differences and similarities between the men through their work and motifs.  The book is split into six sections including the houses they lived in, fabric, birds and pomegranates, bookended with an introduction on them both and suggestions for further reading.


Morris is related to us via extensive quotation from Fiona Macarthy's biography.  Surrounding him are the influences of nature as escape, the 'cruel' caricatures by Burne-Jones and Rossetti, the prolonged affair of his wife and Rossetti that drove him from his home.  Byatt visits the houses that are shrines to him, to Kelmscott and the Red House, feeling his presence in the design of the rooms, the embroidery, the patterns.


Fortuny, by contrast, came from artistic aristocracy in Spain. His parents were the well-spring of his interest and inspiration, from his mother's passion for fabric and his father's art and armour collection.  The home bore signs of artistic theatricality and so it seems natural he would pursue and innovate such beginnings into invention and beauty.  After his father's death, the family moved to Paris and then to Venice, partly because his mother wanted to detach her son from a divorcee, Henriette Negrin.  Henriette moved too, become wife, muse and artistic partner to the designer.

The women expose the similarity and difference between the men.  Both were accomplished craftswomen, needle workers, artisans, involved with and offering direction in their husband's vision.  Byatt describes the Fortunys as existing in a domestic bliss closely tied to their work, creating together.  The Morris relationship is seen as more fractured, Jane's part less natural and easy, impeded by her sexual appetite elsewhere.  Where as Henriette is part of Team Fortuny, Jane is less easy to define, overshadowed in loyalty by her daughter, May.


I liked the comparison of the influence on fashion, not a side of Morris that is usually argued as strongly as his many other talents.  Morris' contribution to rational dress through Jane's gowns are shown alongside Fortuny's iconic Delphos gown. Despite being an easy column of pleats it was a dress made for standing still and looking magnificent rather than anything else.  Still a trade secret, the fine pleating evoked ancient Greece and was made for travelling, happiest when rolled like a skein of yarn in a specially-made box. Jane's gown, by contrast, were about comfort, about freedom, converting an existing fashion form and subverting it.  Whilst Fortuny reached South for inspiartion and Morris reached North, both reached back in time, before restriction, before the need to render women helpless in corsets and hoops.


Both men were respecters of craft, men who mastered and practiced crafts and took pride in handcrafting.  Both travelled and found artistic identity in different cultures and the material culture therein.  Byatt brings us the clear differences but speaks eloquently of shutting her eyes by the side of the Venitian canal and seeing Morris by the Thames, the aquamarine of Venice and the grey-blue of the English countryside.  They were men who lived a generation apart (Morris being of an age with Fortuny's father) but sharing ideals and paths in terms of what they desired from their work and the way they approached it.  One was a socialist, one an aristocrat, one reached North, the other South, but somehow because of their energy (which never seems like an adequate word for Morris) they stand out among their peers and have more in common with each other than others of their time.


You don't need me to recommend this book, it's A S Byatt and you're bound to buy it anyway and possibly have already.  It is a slight book, small in size and only 184 pages long but lavishly illustrated throughout.  If I have niggles they are ones I always have about Byatt's work, primarily that she finds sex difficult to talk about, so the passages about Rossetti and Jane Morris are awkward.  I also do not agree with some of her (or rather Fiona MaCarthy's) opinions on Morris' treatment by his so-called friends which I feel are more complex than pure cruelty.  Where the text excels for me are where Byatt speaks of the feeling and mood of places, her feeling of personality through space, colour and material.  What I found slightly off-putting was that she seems to have felt the need to back everything up with quotes from other people's work when it wasn't necessary all the time.  It was as if she lacked the confidence to just give her opinion without supporting evidence, even when it came down to how she felt about a place.  However, her writing is easy and enjoyable, like listening to a friend telling you about her travels and it is always a pleasure to be with her.

I now want to know more about Fortuny, and I want to go to Venice in a nice frock.

To buy Peacock and Vine visit Amazon UK here and US here or your local bookshop.
Posted by Kirsty Stonell Walker at 17:59