Whilst researching many and varied things, I came across a very modern literary affair that is all but forgotten now.  I expect some of you clever lot have read The Silver Domino (available to download here) but I had been unaware of it until it cropped up in my Tennyson research.  Today's post therefore is about fame, critical reviews and how Tennyson held the key to the identity of one of the most notorious writers of the 1890s... 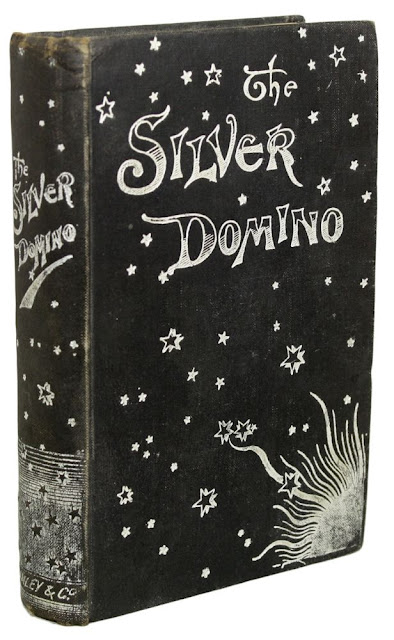 In the second edition of The Silver Domino from November 1892, a review is quoted as saying:

The unknown author of the 'Silver Domino' has been good enough to send me his book, which is very bright and amusing and outspoken.  he has his knife into a great many people (The World, October 10th)

First published in October of 1892, The Silver Domino was an anonymous review of the contemporary literary scene with its irreverent tongue firmly in its cheek.  The author simultaneously ripped into author and critic, publisher and journalist and a great many people in public life.  The tone swung between fond teasing to down right rudeness: Oscar Wilde, the 'Social Elephant', is described as fat, Swinburne is a toad with a jewel in his head and so on.  The passages on Kipling begin as flattery but roll on so unstoppably that you are left in no doubt of over-excited critics who wish to 'blow his skin out into the sizer of a bull'.  By the end of that section it is noted that Kipling is old news as Eden Phillpots has been hailed 'the new Kipling'. Ouch, so much for reviewers...

As a writer I found The Silver Domino both terrifying and hilarious because it shows how perverse readers (especially those who feel entitled to publicly comment on your work) can be.  I have had all manner of reviews, good, bad and frankly perverse, one that mentioned my awesome eyebrows, and you have to learn to take it all the same. At the same time it teaches you to exercise the same caution in your reviews as you would wish people to show you.  I have only ever received nice reviews from people I know, which is both smashing and also reassures me that I know sensible people who understand that if you don't like a book, it's massively egotistical and rude to slam it and the author in public.  It is therefore unsurprising that the question on everyone's lips was 'who is the Silver Domino?'


As soon as it was published, the press went wild with speculation - 'Considerable excitement has been aroused in literary circles by a work entitled "The Silver Domino" ... the writer is evidently on terms of acquaintance, if not familiarity, with several distinguished persons and has many grudges to wipe off against these men of letters who are also occupied in criticism.' (Manchester Courier, 28 October 1892).  Many men were suspected of the hatchet job, including Herbert Vivian and Henry Labouchere MP, both editors of magazines, but a whisper arose that the hand that held the poison pen belonged to Queen Victoria's favourite novelist, Miss Marie Corelli...

Corelli is all but forgotten now, which should be a sage reminder of the fickleness of public taste.  In 1892 she was one of the biggest selling and most beloved writers in the country.  Her books flew off the shelves in edition after edition and despite the negative reviews and critical dismissal, she was more popular than any of her male counterparts.  She was so well known that she was the alleged basis for the character of Lucia in Mapp and Lucia and the flighty female novelist in Angel  by Elizabeth Taylor.  Born the wrong side of the blanket, Isabella Mary Mills managed to straighten out her reputation via a finishing school and a change of name.  As Marie Corelli, of dodgy Italian descent, she wrote books that were requested by the Prince of Wales (who briefly romanced her), Queen Margarita of Italy and Queen Victoria, who asked for all of Corelli books to be sent to her on publications.  Her reviews were bad but as Oscar Wilde told her in 1887 'such alot of talking-about-you does more good than an infinite number of bad reviews'.  So, all was prosperous and good until The Silver Domino was published... 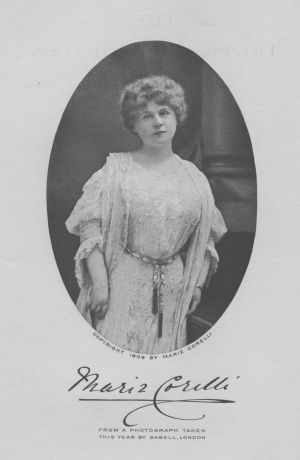 Almost immediately Corelli was rumoured to be the author of the book, and just as quickly she denied it.  Although she continued to write novels that the public adored, the bad feeling in the publishing world over the savaging they had received affected Corelli personally.  Her old publisher and friend 'parted company' with her (or dumped her unceremoniously), possibly as a response to the chapter in The Silver Domino 'Describeth the Pious Publisher' which includes the following on the relationship of publisher to lady authors: 'he has no cause to love you or ask the Almighty to look after you, unless he is making a "good thing" out of you... He does not mind lunching with you - oh not at all. And while at luncheon he advises you, patronisingly safely, as to how you should write your next book.' Ouch.


The description of the treatment of women authors is particularly harrowing: 'He tells them first how well they are looking - his next step is to call them 'my dear' ... Even the fiercest, ugliest "blue stocking" that ever lived is conscious of a nervous quiver through the iron fibres of her soul, when the fat, unctuous, kindly pious publisher, unawed by her stern features, says "my dear"...' (pp.211-216).  No wonder people wanted to know who could publicly say such things, but possibly after reading that the bigger mystery is how they could have imagined it was a man.


The argument raged well into the new century and when a new edition of The Silver Domino was published in 1902, the publisher's announced it was "unquestionably a man" who had written it.  By that point, however, a rather interesting piece of evidence had come to light.  In the front of the second edition, published just after the death of Alfred, Lord Tennyson, there is a note from the author.  Despite the criticism of The Silver Domino being merely a bitch-fest of literary proportions, the author was aggrieved that their chapter on Tennyson had gone unrecognised and unquoted for the love it had shown to the Laureate.  The author felt furthermore that the outpourings of public grief by journalists had lacked the sincerity that The Silver Domino had displayed, as the author claimed friendship with the poet.  To prove this point, a letter is quoted:-

"My dear __, I thank you heartily for your kind letter and welcome gift.  You do well not to care for fame.  Modern fame is too often a mere crown of thorns, and brings all the vulgarity of the world upon you.  I sometimes wish I had never written a line.  Your friend, Tennyson."

Tennyson commands a lengthy section of The Silver Domino, 'Of Certain Great Poets', about his shunning of public life.  In it, the author pleads with the Laureate to allow a little worship because the public loves him.  It is a really interesting piece because despite the odd cheap joke such as 'I do not want a lock of your hair or your autograph, for the autograph I have in your own letters and certainly you cannot spare any hair just now', it speaks to anyone who has ever hero-worshipped an aloof figure.  With all of The Silver Domino, you are waiting for the knife to go in, but I found it a rather sharp commentary on the relationship of author and reader.  The text argues that readers deserve access to authors on a personal level because they take the time, effort and expense of allowing the author to tell their story.  An audience who expresses nothing but love to an author should be allowed to express that personally or at least the author should acknowledge the truth of the relationship - 'You treat with ill-mannered, 'touch-me-not' disdain the very people whose faithful admiration gives you all the good things of this life which you enjoy.' If you have ever loved an author for the books they wrote and longed to tell them so, The Silver Domino offers a justification for your desires.


Back to the author.  In 1898, Lady's Realm published a piece on Marie Corelli, quoting a letter she had received from her chum Tennyson, after she had sent him a copy of one of her books.  It didn't take people long to spot that her letter and the one in the front of The Silver Domino were almost identical.  An uproar sprang forth between people mocking Tennyson for being caught writing 'stereotyped form of note to all intrusive literary figures', mocking Corelli for treasuring what amounted to a compliments slip, and those that tentatively suggested that maybe, just maybe it was proof that Corelli was the damned elusive Domino.  With Tennyson deceased and Corelli still living, denying authorship vigorously and able to sue, nobody bothered to press the matter further.  By the time of the next edition in 1902, the author was again thought to be male and that is how it was left, despite people suspecting the truth.  I like The Aberdeen Journal's final take on the whole business - 'By and by no doubt the public will come to understand the ways of the modest persons who 'do not care for fame', but yet somehow contrive to never miss a highly remunerative notoriety'. Ouch, worthy of The Silver Domino herself.

And yes, Marie Corelli was indeed the author of The Silver Domino, and Tennyson would never have dreamed of sending a standard letter....
Posted by Kirsty Stonell Walker at 16:26