We Are Villains All: Five Bits of Stuff

Hello Chaps, and welcome to my new novel, We Are Villains All, published this week!  I very much hope you will buy it and enjoy it and so I wanted to tell you some things about it without giving away any spoilers...

1. His Gaze is Golden

We Are Villains All started life a decade ago as a short novel called His Gaze is Golden which I wrote while pregnant and under threat of redundancy. Nothing cheers me up like bumping characters off in a bloody manner.  Anyhow, His Gaze is Golden was set in modern times but pretty much followed the same story, albeit shorter.  The problem I had was that my characters always wanted to act in a more old fashioned way which was at odds with their modern setting, and I couldn't make it grow into a longer novel.  In the end I just left Max and Brough alone, hoping that one day I would be able to see a way to make them more comfortable in a story.  After I finished A Curl of Copper and Pearl I was considering what to do next and I suddenly realised that Max Wainwright was secretly a Victorian poet, writing his love poems while being unlucky in love, and Brough, who was an artist in the first draft, naturally became a photographer, so cocky in his modern art form. It all fell into place and eighteen months later here we are...

I wanted something that summed up the bravado and utter unstoppable force of Brough Fawley.  Setting the book in the 1860s and 1890s offered the posibility of photography, still quite a young art form in 1860 but one an arrogant young man would fit into, especially one who liked to capture and collect people (in every sense of the word).  The idea of photography, notions of development of image, positives and negatives, all come into play in the relationship between Brough and Max.  In a way I wanted Max and Brough to reflect each other in their professions - both have the ability to make something beautiful seem to appear from nowhere through their craft. 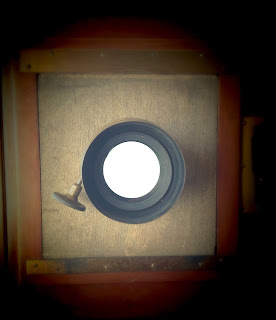 I went to Dimbola Lodge to do wet plate photography for myself, to experience the smell, the feel of the glass plates in your hands, the rhythm of pouring, drying, timing your efforts under the command of the piece of glass covered in silvered egg.  It is like magic and recalled many happy hours I spent as a child in my father's dark room.  I can see the attraction of being able to arrest the beauty in the world onto a piece of card and call it your own. Julia Margaret Cameron said that she wanted her photographs to 'electrify you with delight and startle the world' and I could not agree more.

3. Sweet Lass of Richmond Hill
There are themes of unrequited love in We Are Villains All and the song that tempts Max down to breakfast one morning plays to this one.  A favourite of George III, this Georgian ballad was extremely popular at the time and ever since, alledgedly bringing us the phrase 'a rose without a thorn' to describe a perfect woman.


I remember standing in front of The Wounded Cavalier at the Tate's 2012 exhibition of Pre-Raphaelite art and falling in love.  I knew it well, it is a famous painting, but seeing it in the flesh you saw how coppery the cavalier's hair is, how beautiful he is and how tragic the whole scene appears.  We assume he is dying but the title just alludes to him being wounded. The man at the back definitely wants him to die and be quick about it as it is obvious that the young lady cradling the flame-haired beauty is being less than Puritan about it all. The tiny butterfly on the sword is just so exquisite, and the fact that the sword is snapped means that I don't really fancy his chances.


When I came to use it in the novel, I knew that it would be the first time that Max and Maud Blake would be in close proximity with each other and she worships him.  Thinking on this further I thought how awkward I always feel when I get to meet someone I consider to be amazing.  It's not a glorious moment at all, it's fraught with concerns like 'what do I say?', 'what if I say something really inappropriate?' (always a risk for me), 'oh lawks, am I allowed to kiss people I've just met? Arty people seem to do that but what if they call security?' and 'is there anything to drink?' Moving on...


The conceit of the photograph gives Maud a chance to see her hero up close, but is that a good thing?  Is that the photographers intention? How much does the painting foreshadow the trouble that Brough Fawley brings to the quiet town of Daneburton? Am I asking too many questions?  Sorry, it's been a long week...
﻿
5. The Fox Mask
Ah, the fox mask.  Of all the things in the story, the fox mask is the one that I get the most comments about...


Masks in general tell you something is hidden, someone is hiding from you.  For someone to ask you to don a mask means they wish for you to assume a different guise, a different purpose.  The fox in the context of We Are Villains All is the antithesis of everything Max Wainwright wants in his life; he wants stability and peace, to remain at a chaste distance from the women in his life.  The Fox wants quite a different thing indeed.


The mask also highlights the fact that one or more of the characters is being deceitful.  The fox mask is a physical object worn by a few of the characters but some people's masks are more sly and make them appear respectable, honest, kind.  More than one of my characters is lying but the question is who's lies are the most dangerous...

We Are Villains All is available now from Amazon UK (here) and USA (here) and from random and splendid book retailers everywhere.
Posted by Kirsty Stonell Walker at 16:07

Email ThisBlogThis!Share to TwitterShare to FacebookShare to Pinterest
Labels: Book News!, We Are Villains All