In the second film review of my week, after Suffragette on Monday, we have Crimson Peak, a gothic rollercoaster, filled with blood, betrayal and extraordinarily beautiful people... 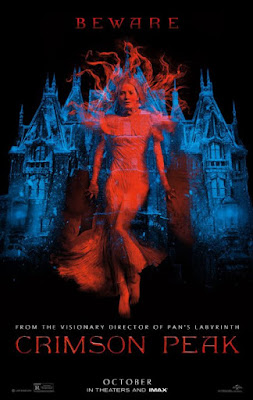 From the possessed imaginings of Guillermo del Toro comes a Victorian extravaganza worthy of the title 'Sensational' .  Del Toro, the man behind such wonderful films as The Devil's Backbone, Pan's Labyrinth and Hellboy as well as producing The Orphanage, Mama and Kung Fu Panda 2 (all terrifying in their own way), is no stranger to terror and the grotesque as well as having a very special talent for the subtleties of horror.


The plot involves Edith Cushing (surely a nod to Peter Cushing), a serious young woman who wishes to be a writer of ghost stories.  Sorry, not ghost stories, but stories that have ghosts in them.  She herself is no stranger to spirits as from time to time she is visited by her mother who passes on a warning: 'Beware of Crimson Peak'.  All this is meaningless until she falls in love with the very dashing Sir Thomas Sharpe and is whisked off back to his home Allerdale Hall in Cumberland to live with him and his extremely disconcerting sister.  Turns out however, they are  not the only people there...

Right, where to start? Well, this is a marvellously Victorian film - from the ghosts, to the family secrets, crumbling family estates and innocent heroine, this bears all the hallmarks of sensational literature. Saying that, you may well know what the secret is long before it is unveiled as anyone who has read Lady Audley's Secret or the suchlike will spot it a mile off but that doesn't matter as the shocks and gore gallop along at a jolly pace.  Mia Wasikowska (known for her Alice in Disney's recent reimagining of Alice in Wonderland as well as the brilliant Stoker) is gloriously ethereal, floating around in white dresses with puff sleeves so translucent they look like wings with the light streaming through them.  Tom Hiddleston is pale and beautiful as Sir Thomas, striving to pursue his childhood dreams of engineering a machine to lift the blood red ore from the grounds of his home.  The fly in their otherwise tranquil ointment is the presence of Sir Thomas' very disturbing sister, Lucille (Jessica Chastain) who I'm sure is overjoyed to welcome Thomas' new bride...

The costumes are glorious and Allerdale Hall, also known as Crimson Peak, is gloriously dilapidated. From the blood red ore seeping from the ground staining the snow to the massive hole in the roof letting in the snow, it's a rotting ruin but I have to say I had a properly English response to the first sight of Allerdale.  I stayed in a B&B in Leeds that was far worse than that.

Things I didn't like are far outweighed by the stuff I loved but are worth mentioning.  It is a film very much for an American audience.  The placing of Allerdale in 'Cumberland' made us raise an eyebrow: although quite rightly still a region in the late 19th century it is more likely to be recognised as a sausage or a terrier and felt a bit like calling a place 'Wessex' to me.  The fact that the hall is crumbling yet still has a functional lift made me laugh especially as our heroine, while fleeing untold terrors ran straight for the lift rather than taking the stairs. Also the degenerate, crumbling English people (personified by Allerdale) as opposed to the righteously upstanding and good Americans (as seen by the Cushings lovely home and the muscular Charlie Hunnam (who is secretly British, shhh, tell no-one) also made me snigger.  It's good to know we can always be the glamorous baddies...

Saying all that, there is much to absolutely adore here.  The ghosts are not wafting spooks but clawing, murmuring decaying bodies that are scary in the shadows and terrifying in plain sight.  Everything is stained red from the ground and it curls off the ghosts like smoke which is very effective.  Our blonde heroine in her white nightie and candle scurrying around the haunted house is pure gothic and delicious and the repeated motif of red and white, ore on the snow, blood on a handkerchief was wonderful.

A few words on why it is a '15' rated film - there are no punches pulled on the violence and it is very graphic in a couple of scenes. As I said the ghosts are decaying after some brutal deaths and that is not pretty.  Also, there is some animal cruelty, not seen but still I am aware that many of my friends are very sensitive to that.  I did find it interesting that the death of the animal was very muted as opposed to the death of one of the characters which was very graphic indeed.  It seems we are fine with seeing what happens when a person's face strikes a nice Victorian washstand repeatedly but we draw the line at squashing a Papillon.  Also, not that this will deter many of my readership, you see Tom Hiddleston's bottom.  When I saw it, a lady in the front row gave a happy squeal at that point. And rightly so. Moving on.


On the whole, I found little in the plot of Crimson Peak that surprised me yet it is a magnificent black forest gateaux of a film with unbelievably beautiful dresses, scenery chewing baddies and heroic quantities of violence.  There is never a dull moment as the ground bleeds, the bath tub holds unpleasant surprises and ghosts enjoy a nice game of fetch.  See it with someone you feel comfortable holding hands with and brace yourselves.

And also keep a shovel handy.  You'll thank me.

Crimson Peak is on general release now.
Posted by Kirsty Stonell Walker at 09:27