Review: The Art of Bedlam

I really need to be careful or I shall end up being known as the Mad Art Historian due to the amount of time I spend reading asylum records, but while artists and models continue to be mad, I shall be there to see what happens to them.  Off I go to The Art of Bedlam: Richard Dadd at the Watts' Gallery in Compton... 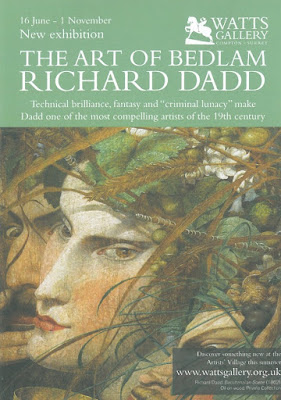 Most people will know one thing about Richard Dadd - he killed his father after going bonkers in the East. If you know one picture by Dadd, it'll be this one...

All those among us that have Queen II can now start singing, as this is The Fairy Feller's Master-Stroke, a tiny little canvas packed full of details. A 'Fairy Feller' is posed with his axe to crack open a nut as various fairy-folk watch.  The paint is almost three dimensional, the different layers separating the spaces, with the whole scene slightly obscured by the grasses in the front.  I spent a fair amount of time with two ladies trying to find the tiny figures dancing on the brim of the hat of the bearded chap in the centre of the image.  That alone nearly drove us mad.

﻿
This is such an intense picture, forcing you to get closer until all you can see is the odd little world.  If ever a picture wanted to express the feeling of mental illness, this is a perfect example because it sucks you in and focuses you on nothing else.  There are oddly grotesque little moments too as well as moments of beauty. Although this picture is very much connected with his insanity, it wasn't the first time he had attempted such a subject.

﻿
Before he embarked on the Eastern Tour with Thomas Phillips, Dadd was already painting fairies in this image of a slightly malevolent Puck.  Not crammed full of the detail that would fill his post 1843 fairy images, it still is rather odd.

Thomas Phillips chose Dadd to accompany him on a tour as his draughtsman and to begin with the journey went well, as can be seen in pictures such as The Halt in the Desert.  His watercoloured works are gentle and powdery rather than the more vivid works of Holman Hunt which I am more used to.  I rather like the dreamlike quality of Dadd's desert nights and an ironic calm that infuses his scenes.  As they were travelling home, Dadd became ill which was firstly ascribed to sunstroke but then it was clear that more was wrong.  His parents removed him to the countryside on his return where he killed his father believing him to be the devil.  Two of Dadd's siblings suffered from paranoid schizophrenia so it is possible that is what caused the crisis.  Dadd was apprehended and taken to Bethlem psychiatric hospital (also known as Bedlam).

If my research into Fanny Cornforth has taught me anything it's that confinement to an asylum does not necessarily result in cruelty, isolation and a medical oubliette.  Once under the care of Bedlam, Dadd was encouraged to paint in a sort of occupational therapy or a way of explaining his emotions.  Included in the exhibition are a set of extraordinarily thought-provoking works entitled Sketches to Illustrate the Passions which show everyday things that contribute to mental illness.


﻿
Including subjects such as Grief, Insignificance and Hatred, each one is a fascinating study of things that drive us as people and if taken too far can result in madness in ourselves and those we influence.  Interestingly the personifications of the passions are quiet, still and remarkably steady as if the madness has held them in place.  Agony is chained and holding his head, tense and wide eyed, not shrieking or outwardly showing expression.  In a way it is more disturbing that we cannot see the normal cries of pain, it's all gone beyond that.  Insignificance, also known as Self-Contempt, shows a little man carrying a portfolio almost as large as he is, to a front door where the handle and bell are out of his reach.  He scrapes his boots in readiness to enter a building it would be impossible for him to get entry to, a perfect expression of that paradox of people who feel an inferiority complex but often display superiority symptoms in compensation.  Somehow the little man with his huge portfolio is both comic and irritating, ridiculous and sympathetic all at once.  Does he really think he can enter the building?

The one thing that does strike you about a good deal of Dadd's work is the detail.  In work like Port Stragglin it is hard to see everything, the minute points in the imaginary landscape, a rich innerland from Dadd's hospital home.

Dadd's work in the hospitals was made possible by enlightened care from his doctors, resulting in his fairy pictures and many other works.  The picture of him painting Contradictions shows him working on the tiny details, his distracted gaze reminding the viewer of his mental state.

A very touching image from the exhibition is this, a portrait of his doctor William Charles Hood who was Physician -Superintendent at Bethlem and acquired Dadd's work, taking a special interest in the artist's work and well-being.  Hood was remarkably young when he worked at Bethlem, under 30 years old in this picture, but he also died young too, in 1870.

I didn't know much about Dadd before I saw this exhibition and now feel I know more than just fairies and madness.  Whatever caused Dadd's suffering, his expression of it through art show an infinite world filled with both beauty and horror, violence and love.  What is remarkable is the way his pictures draw you in, an intimate whispering of madness until it seems sane and reasonable.  The fairy will crack open the nut, but then what will happen?

The Art of Bedlam is on until the 1 November and further details can be found here.
Posted by Kirsty Stonell Walker at 17:44