Photographing Alice (and Ina and Edith)

Once upon a time there was an old lady who lived on the south coast of England.  She had a secret, which as it turned out wasn't much of a secret no matter how hard she tried.

When the old lady died, her ashes were buried by the war memorial that held the names of two of her three sons.  On her gravestone her secret was revealed... 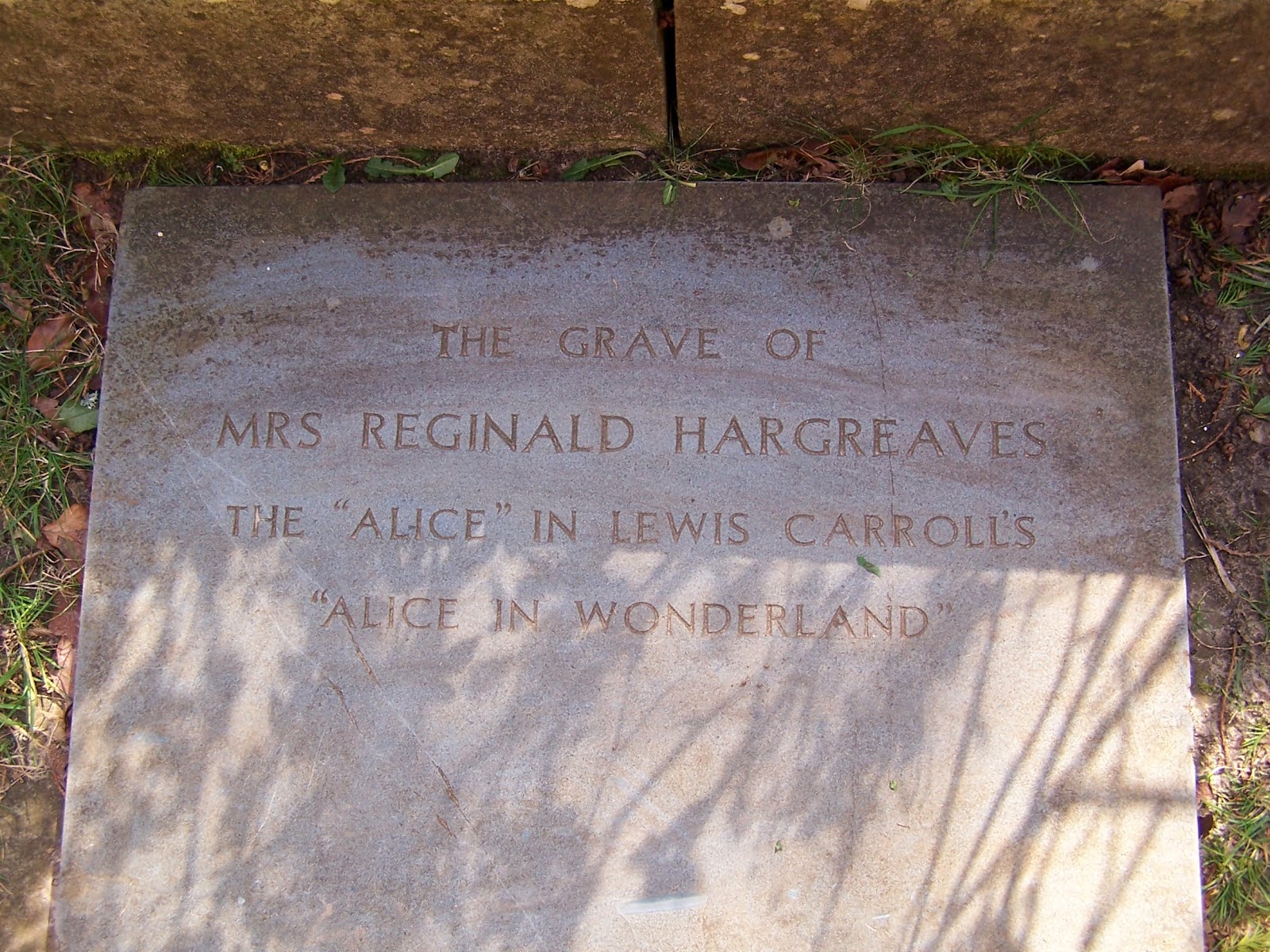 Alice Hargreaves, or Alice Liddell as she is more famously known, died in 1934, 72 years after the writing of a story that would make her immortal.  When she was an old lady she became famous again, her photograph filling the papers as the world found out what had happened when the magical little girl had grown up. Once more her face was the subject of interest and record, just like when she was a little girl.

Perhaps then we have started at the wrong end of the tale.

Once upon a time there was a little girl who lived in Oxford.  Her name was Alice...

Plenty has been written about little Alice, her sisters Lorina and Edith and a boat trip they took with a serious young man called Charles Lutwidge Dodgson (also better known as Lewis Carroll).  Dodgson was a friend of Alice's older brother Harry and Lorina, but when Harry went up to school, younger sisters Alice and Edith joined Lorina on her outings with the young man.  Dodgson wrote the story of Alice's adventures underground as a way of entertaining the girls on trips and in the tales he created a version of Alice who is curious, questioning, brave, obstinate and caught between trying to leave and trying to see more.

When awkward Dodgson became Lewis Carroll, author and photographer he transformed himself in the same way as he transformed his most famous subject. Under his lens, Alice is a beggar maid, a ragged creature of pity.  In other photos, she is also a plush cat on a cushion with her equally silky sisters, as far from the beggar maid as you can imagine...

Slipping by most people's notice was always Lorina, eldest sister and foremost friend of the young author/photographer.  When Dodgson was expelled from the Liddell family circle, a very twentieth century interpretation was placed upon it.  To our modern eye, some of the photographs look decidedly iffy: a young half-naked girl looking challengingly towards the camera, but are defended by many as being typical of contemporary art, coupled with knowledge that the mother was present when the majority of the pictures were being taken.  I say the majority for a reason, because there exists a very NSFW image of Lorina which is now argued to be the cause of the rift between the Liddells and Dodgson.  It was featured in the recent documentary on Dodgson and can be seen online and is of a very naked teenage Lorina and has no pretense of art at all.

It is interesting to note that Alice is often playing a part in Dodgson's photographs but Lorina just sits there as the subject of that picture. It's almost as if Lorina does not need to play a part, she is the subject he wishes to take the picture of.  Alice, however, was dressed up, transformed, posed, a range of characters including the most enduring, that of 'Alice' which she was to be reminded of for the rest of her life.

Away from Dodgson and his interpretation of the sisters and Alice in particular, the Liddell girls found others who wished to capture their beauty.  Around the time of Alice's Adventures in Wonderland, artist William Blake Richmond showed the sisters in a similar triangular arrangement to the above photo, with Lorina as the pinnacle. Although the two youngest still appear quite innocent and childlike, Lorina had begun to look more knowing and grown up.  It is unsurprising that Mrs Liddell, nicknamed 'the Kingfisher' after her desire to wed her girls to royalty, would want to separate her daughters from the poor young man who spent so much time with them.  Improper intentions or not, young Mr Dodgson did not have good enough prospects for Mrs Liddell.  The final picture he took of Alice is rather a melancholic piece...

At 18 and a marriageable age, Alice had to say goodbye to her childhood friend and concentrate on her future.  The notion that Dodgson was cast out for evermore isn't quite true but he did separate from the family for 6 months after which his relationship with the Liddell parents was cooler. He and Alice must have remained on good terms as Dodgson acted as godfather to her second son.  He didn't take any more photographs of her though, that mantle was taken up by another.

When the Liddell family moved from Oxford to the Isle of Wight in the early 1870s, they rented Whitecliff House, not far from Dimbola Lodge.  Naturally they caught the attention of Julia Margaret Cameron who was ever vigilant for new models. In the Liddell sisters she found young ladies of experience...

All three girl, from the left Lorina, Edith and Alice, surround Julia's husband, Charles Hay Cameron.  His dark drapery and age contrasts with their youth and beauty, and they appear satellites around his presence.  It's unusual to see the girls posed with another person, no longer so insular and separate.

Cameron also took some startling solo pictures of Alice.  Pomona has echoes of Dodgson's beggar maid, a mirror image of the pose taken by a woman rather than a girl.  Her expression is one of challenge as she nestles in the tendrils of the garden.

From the same session, Cameron references her own work, this time "Call I Follow, I Follow, Let Me Die!" of 1867, with the female figure in profile, her hair fanning out behind her. Rather than being a goddess like Pomona, Alethea refers only to 'truth', interestingly looking away.


In this pair of images, Cameron portrays Alice as St Agnes, patron saint of chastity, gardeners, and girls, amongst other things. Rather than being posed with a lamb, Cameron chose the other attribute, a palm, as no doubt it kept stiller than lifestock. My favourite has to be Ceres, goddess of the harvest, fertility and motherhood. She is a beautiful plant in the wild tumble of nature, the white flash of her flesh echoed in the sweep of grain crop against her shoulder. Alice makes a fine model for Cameron, with her strong defiant features a perfect addition to Cameron's other images of young, handsome women.
Even before her marriage in 1880 to the cricketer Reginald Hargreaves, the public photographs ceased.  The early and sudden death of Edith in June 1876 traumatized the family and drew the sisters together in grief.  I don't think it's a coincidence that the remaining sisters could not find the will to be the same as they had been.  When they had posed, it was often as a trio, even if there were subsequent solo images.  Now that triangle had been broken, the ones left behind did not assume the role of muses without the one who had vanished from view. Alice Hargreaves (nee Liddell) would always be little Alice, tumbling down a rabbit hole on a boating trip with her beloved sisters. Alice, Edith and Lorina Liddell were each immortalised (to differing degrees) by Dodgson and Cameron, as a trio of sisters made extraordinary by the inspiration they lent to others, but it is arguably a mistake to imagine that the images we see are mere portraits of the girls.  Just as Carroll's Alice is not Alice Liddell, then the little girls in the photographs are a complex mixture of surface and meaning that is dangerous to confuse. Maybe in understanding that it becomes clear why Mrs Reginald Hargreaves sought to separate herself from the images and text that drew on her as inspiration. She was Alice no more.

But then maybe she never had been.

Posted by Kirsty Stonell Walker at 19:49