Review: The De Morgans and the Sea

On Friday, the smallest Walker and I went to Mr Walker's place of work and visited the lovely new exhibition, The De Morgans and the Sea.  The Russell-Cotes Art Gallery and Museum in Bournemouth have turned over two spacious rooms to a display of the work of Evelyn and William De Morgan.

The husband and wife team had an extraordinary creative partnership and shared the theme of the sea in many of their works.  Where better to see them than in the cliff-top art gallery, overlooking a glorious golden beach?


Starting with William De Morgan, his pots and tiles are in deliciously resplendent colours.  He made the most amazing tiles showing fanciful medieval ships, taken from manuscripts, woodcuts and engravings... 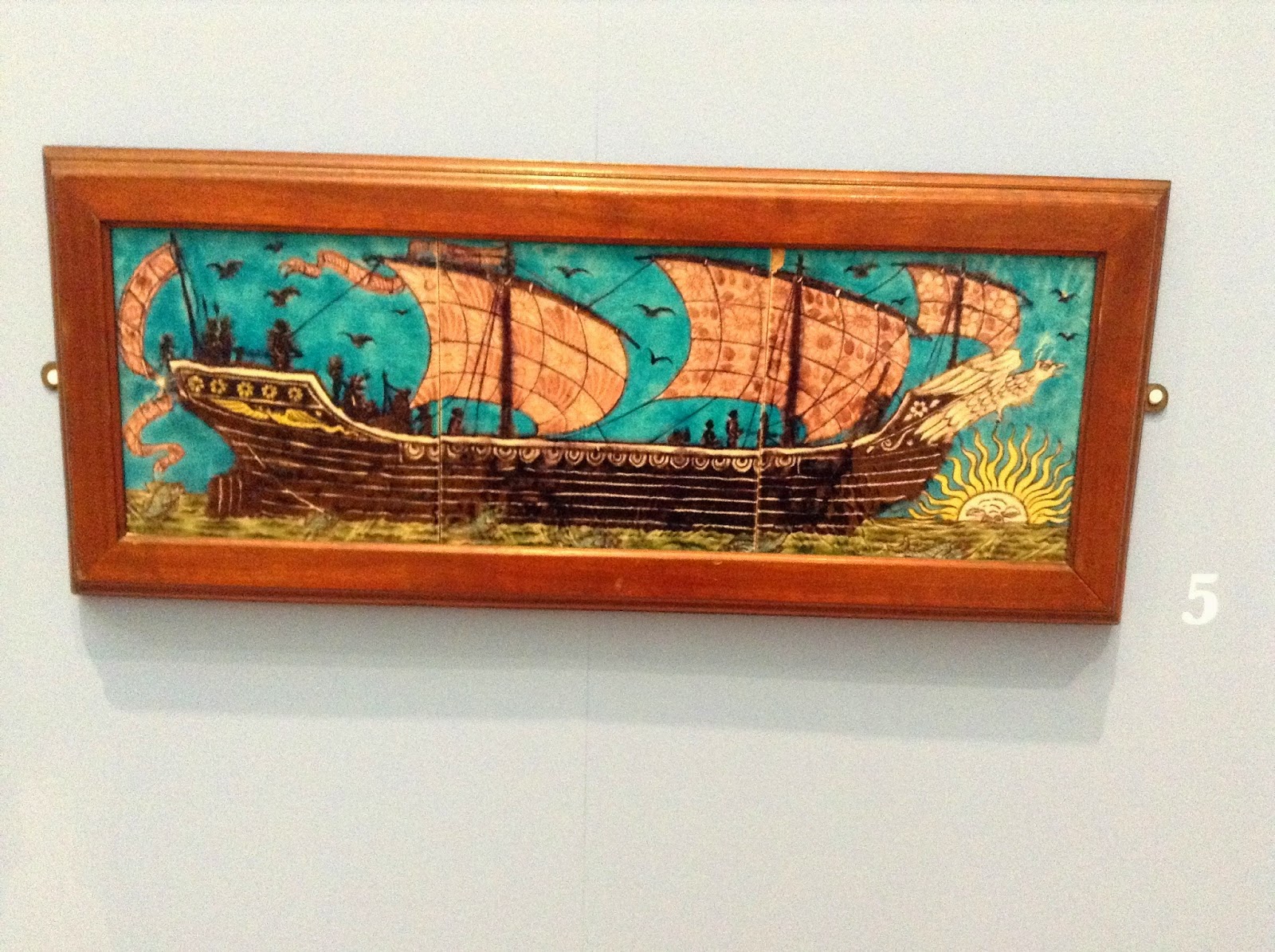 One of my favourite pieces was this jar in ruby and gold-lustre earthenware showing curls and swirls of fish swimming around its plump figure... 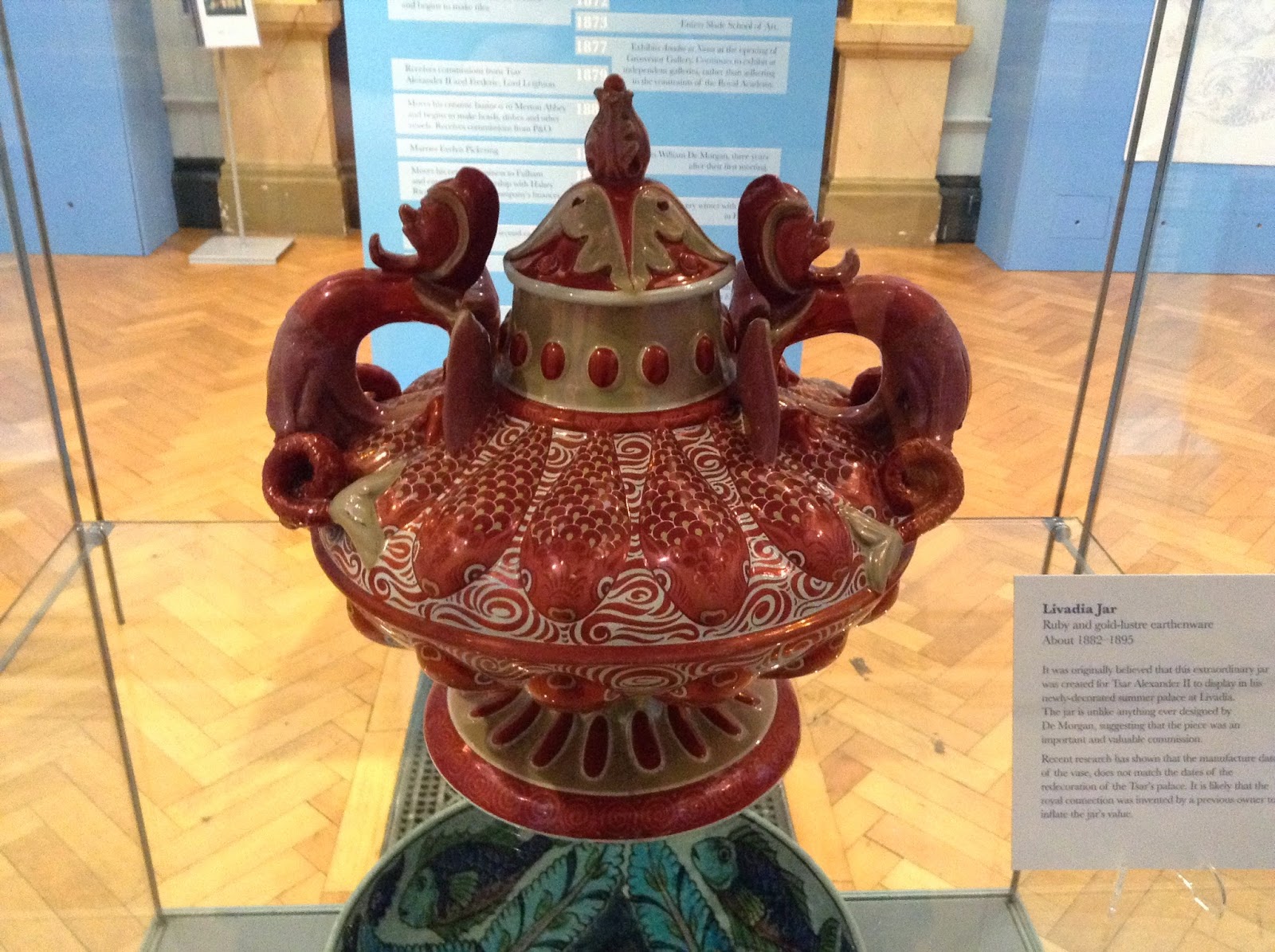 There is a very 'touchable' quality to De Morgan's pots (which of course you can't indulge in!) because they are so marvellously three dimensional.  Somehow they manage to strike the right balance between tasteful and insane, and although they have a very Victorian aesthetic, the beautiful and subtle colours make them timeless.  I want a fish jar. It's so gorgeous.  Some of his tiles were used on P&O liners when he was employed by the company from 1882 to 1900 and his tiles decorated the public rooms of twelve of their liners, enhancing their sumptuous interiors.  Sadly none of the ships have survived, but a number of duplicate tiles were created and are on display at the exhibition.

I loved this cabinet as it showed both De Morgan's work together, Evelyn's painted frieze and William's pots, which leads me on to Evelyn and her beautiful pieces.  You will be familiar with the Russell-Cotes' De Morgan, Aurora Triumphans...

Mmmm, angel-y.  When you look at some of De Morgan's paintings, the seaside setting is very subtle.  Take for example this one...

Lux in Tenebris or 'Light in Darkness' shows an angelic figure bringing light and hope in the form of an angel with a laurel branch.  In the darkness below her feet lurks a crocodile, symbolising the Devil and peril.  Further to this, she is floating above some rather terrible looking rocks while the placid sea laps around.  The canvas is very dark but the angel glows in her pale golden gown.  De Morgan is telling us that life is a mixture of calm and trouble, hope and darkness, reflecting her interesting in Spiritualism.

Goodness me.  The story behind this (should you need a story to justify that amount of boobage) is that the Little Sea Maid, on the left, was distraught when the Prince declared that he didn't love her.  Her five older sisters sold their hair to the Sea Witch in exchange for a knife so that the Little Sea Maid could go and kill her feckless Prince and return to her watery home.  Instead the Sea Maid killed herself rather than harm the man she loved.

This is lovely in the (everso abundant) flesh, and the mermaids, all painted from the same model, the De Morgan's Maid, are icily beautiful and remote.  The sea is deep and inky blue, contrasting with the pearly skin of the girls and the scales of their tails reflect the light below the water.  It is wonderful.

Her choice of classical subjects made use of her love of the shoreline and here we have Ariadne waking up on Naxos to find that she picked a rubbish boyfriend.  Usually she is pictured having a right tizzy because the ratweasel Theseus has gone off with another woman but De Morgan shows her as miserable as a woman awaiting lie-detector results on Jeremy Kyle.  It's actually an uncomfortably accurate portrayal of a wronged woman, internalising her pain, unsurprised and listless.  It's okay Ariadne, something better will be along in a minute...

I'll finish with what must be my favourite image from the exhibition, Boreas and Oreithyia.  Boreas, the Greek god of the North wind, fell in love with Oreithyia, daughter of the King of Athens.  When the normal chat-ups didn't work, he fell back on the traditional pick-up and fly-off.  Charming.  When I saw this, I actually understood how people could mistake De Morgan's work for Burne-Jones, especially in the figure of Boreas.  He is painted from Alessandro di Marco, the model for The Beguiling of Merlin by Burne-Jones, and he does look rather splendid with a pair of wings.

The exhibition is definitely worth a visit and it does give you a chance to see the rest of the marvellous museum at the same time.  The De Morgans and the Sea runs from 1st April until 28th September and further information can be found on the Rusell-Cotes home page here.
Posted by Kirsty Stonell Walker at 12:40