You know me, I'm a sucker for a book on Pre-Raphaelite art, so when I was sent a review copy of the new catalogue of the Pre-Raphaelite collections in Liverpool, I was delighted. 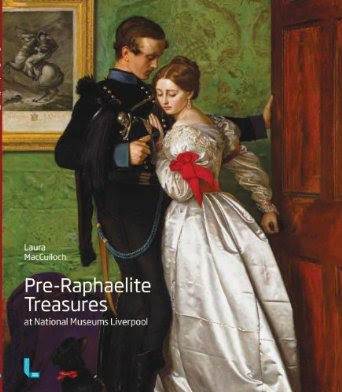 I've been to Liverpool a few times to visit the Walker Gallery and the Lady Lever Gallery and have always longed for a catalogue of their collections.  The ones I had did not do the collections justice as Liverpool has an astonishing array of works, enhanced by the separate collections that have amassed them.  Together with Sudeley House, they seem to give you three different sides to the Victorian collecting mileau: The 'official', municipal collection as represented by the Walker Gallery in the middle of Liverpool, the unusual, philanthropic feel of the Lady Lever Gallery in its own little village, Port Sunlight, an entirely artificial eden for the Lever Brother's factory workers, and Sudeley House, a Victorian merchant's house with a collection that feels less public somehow.  Anyway, all three combine to make a spectacular collection.  After all, look who calls it home...

Ah, Goaty.  Anyway, the book is split into three sections: The Pre-Raphaelite Brotherhood, Later Pre-Raphs and Liverpool Pre-Raphs.  The first section is self explanatory and Liverpool is home to the following well-known paintings, illustrated in the catalogue...

Liverpool has an impressive collection of Pre-Raphaelite paintings, especially Millais' work, they even have the God-awful Cymon and Iphigenia which is important for showing what Millais did before seeing the light.  However, what I possibly would take issue with is the thorny matter of what counts as 'Pre-Raphaelite'.  There is a good short essay explaining the chronology of how the Pre-Raphaelite movement grew from the Brotherhood, and how people like Madox Brown fitted within the circle.  The problem I have, as the pickiest person ever, is that the first chapter should be called 'The Pre-Raphaelite Movement' rather than 'Brotherhood' as the chapter contains artists associated with the Brotherhood but not one of the original Secret Seven.  The essay explains all, but that relies on the reader not flipping straight to the yummy pictures.  I can't be the only person who goes straight for the paintings, am I?

Second chapter is The Later Pre-Raphaelites, the second generation emerging after the late 1850s, including Ned Burne-Jones, Arthur Hughes and Frederick Sandys.

Again, I hate to be picky, but among these images are works by the Brotherhood, like Sibylla Palmifera by Rossetti, which although are from the 1860s and 1870s are also by the original Brotherhood and so I feel it might have been clearer if the chapters had purely chronological names.  Saying that, it's a joy to see such artists as Byam Shaw, Fortescue-Brickdale, John Melhuish Strudwick and John Roddam Spencer Stanhope in  glorious colour included in the discussing of Pre-Raphaelitism.  Look at this one, it's utterly glorious and worth the cover price alone...


The last chapter is about Pre-Raphaelite artists who hail from Liverpool.  You would get extra points if you knew any of these well, other than William Lindsay Windus.  Most people only know Windus for Too Late, but it is nice to see pictures such as The Young Duke and Burd Helen illustrated here.

The general story about Windus is that Ruskin said he was rubbish so he destroyed all his pictures and never painted again but this is nonsense.  A quick look at the BBC 'Your Paintings' collection online shows 31 pictures in public collections, which is more than just the single picture somehow saved for posterity.  An explanation for Windus' lack of general success is given in the catalogue - his wife died young and he had to care for his daughter which left him very little time for art.  It is true that Ruskin was harsh about Too Late, but his domestic crisis was probably of more consequence as The Young Duke dates from around 1865, about 7 years after Too Late.

The images in this book are reproduced in beautiful detail, my only issue being when the image extends over the centre of the two-page spread, which means the images is slightly clipped and distorted. I've seen worse and the book can be forced easily to lie flat. I don't think the spreading of the images is necessary and they only do it in a couple of cases so it's not too much of an irritation.  Despite being quite a small scale book (250mm x 210mm) it packs in 71 pictures, 50 of them colour, in its 96 pages.  It definitely gives you the impression that the author Laura MacCulloch was writing a far more ambitious book than expected, and the reader gets the benefit.  The design of the book is nice and the paperback covers fold out like a dust jacket, with illustrations under the flaps.  It's a good product, surely a decent model for any museum looking for how to produce an affordable catalogue of their specialist collection.  It looks modern and accessible.

At £19.99 it's more expensive than I expected, but I see that you can already buy it for around £13 on Amazon.  I think it is worth £20 of your money as it is a well thought-out product and gives you information on Liverpool's place in Pre-Raphaelite collections.  They have an astonishing array up there and I look forward to my visit later in the year when I go to Port Sunlight for the drawings of Burne-Jones.


Posted by Kirsty Stonell Walker at 07:40