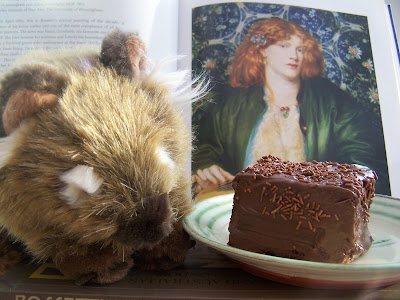 This is Fanny the Wombat, and she has travelled all the way from to be with me (thank you eBay). She is called Fanny because if you think about it, Fanny Cornforth must have known the original Pre-Raphaelite wombat, Rossetti’s pet called Top.  But Fanny and her wombat connection starts earlier than that…

In his 1859 diary, George Boyce wrote that he Rossetti and Fanny went off to the Zoological Garden and were ‘most amused by the brown bear, wombat and some owls’.  Christina and William had introduced their brother to the joy of wombats a few years previously, and DGR had embraced the little round marsupials as kin, often meeting friends at ‘The Wombat’s Lair’.  It’s interesting to think that possibly an interest in the Australian animals was a curious byproduct of Thomas Woolner’s emigration in 1852 (and subsequent return in 1854).  Anyway, back to Fanny…

When Christina Rossetti described the ‘Goblin Men’ in Goblin Market, she wrote ‘One like a wombat prowled obtuse and furry, One like a ratel tumbled hurry skurry.’  Her brother’s illustration, I think, give the clearest picture of a wombatesque goblin, while I would gladly argue that Fanny Cornforth is the model for Lizzie, hacking off her hair to pay for naughty goblin fruit.
Rossetti’s move to Cheyne Walk allowed him to collect exotic animals that ruined his home and jollied him along in various ways.  He seems to have owned the following (and no doubt more) – a zebu, peacocks (or ‘chicking’ as Fanny called them), monkeys, an armadillo, a couple of kangeroos, a murderous raccoon (whose screaming in the night was mistaken by the manic Rossetti as the sound of Lizzie’s unquiet ghost), fallow deer, a bevy of dormice (which may have inspired Lewis Carroll), dogs, owls and woodchucks and who knows what else, gathered from Jamrach’s exotic store.  Also visits to Cremorne Gardens afforded Rossetti the sight of many a odd beast, and maybe Mr Henry Cooke’s celebrated Circus Troupe of Educated Dogs and Monkeys (again, television hadn’t been invented.  Mind you, I think that sounds more interesting than most of the programming of a Saturday night).  Finally, of course was Top the Wombat.
Top cost £8 (the equivalent to around £350 now) and came into Rossetti’s life just when he needed him the most.  Top arrived as Rossetti was away at contemplating suicide and worrying over his failing eyesight.  Collected from Jamrach’s by Rossetti’s assistant, Harry Dunn, sketches were sent to Rossetti to cheer him up.  They seem to have done the trick, as Rossetti wrote to Jane Morris ‘neither from owl nor bat / Can peace be gained till I have clasped my wombat!’

Top was an affectionate little soul ‘fond of nestling up into any hollow of arms or legs and nibbling one’s trousers’ as William Michael reported.  There is a little confusion over whether Top was a he or a she, but his owner firmly calls the wombat ‘him’ in correspondence.  He snuggled up to many guests to Cheyne Walk and I like to think of him sat on Fanny’s knee of an evening.  Sadly, as with most of Rossetti’s animals, Top sickened (possibly from mange, or more likely his diet), his eyesight failed and he died in November 1869, not long after Rossetti had allowed his late wife’s body to be unearthed.  His grief at losing his beloved wombat seems to be a channel for his guilt in disturbing , but also possibly something more.

When Rossetti and Fanny grew older they referred to eat other by animal nicknames: Fanny became ‘Elephant’ and Rossetti became ‘Rhino’, but I wonder if Rossetti tended to identify with the animals he kept, particularly with the wombat.  He may have called the wombat after his friend, but the picture of the wombat trailing after Jane Morris brings to mind the notion of Rossetti removing cream from Jane’s strawberries and worshipping at her feet.  Top’s failing health, most noticeably his failing eyesight may have rung a few bells with the rotund painter/poet, and so Top’s death may well have struck Rossetti as his own death, or the death of his separate self, his furry little doppelganger.  He apparently had Top stuffed and stood in the hallway of Cheyne Walk, but Top has gone missing since.  We need to find that wombat!

In Violet Hunt’s splendid biography/work of utter nonsense Wife of Rossetti she wrote that Rossetti created a monogram for Elizabeth Siddal indicating her name by a ‘hieroglyph’ of a dove. ‘Had he made one for Fanny’ she continued, ‘it might well have been a wombat.’  I like to think of the wombat as a symbol of the gentle, happy, warm side of Rossetti’s life, all too short in duration.

So, this week, Fanny the Wombat came to stay and demanded a Lamington for her cake today.  I sadly did not have any desecrated coconut (I’m not a fan, I must admit, having probably eaten far too much of it in the 1970s) so had to use sprinkles.  I was told that it was a shocking oversight on my part, in between mouthfuls of cake, but it would do for this week…
Posted by Kirsty Stonell Walker at 05:49