The Cruelty of Hope

When is a closed box not a closed box?  The obvious answer is ‘When it’s a Jar’.  Apologies for the terrible joke but there is a reason and that reason is today’s subject: Pandora.

If you love the Pre-Raphaelites (and I take it you lot do) you will of course be familiar with Rossetti’s images of Pandora.  Monumental and unknowable, Jane Morris cradles that golden box with oddly tense fingers.  I always though that what Rossetti leaves out from the face he often expresses in those long, supple hands and Pandora’s mistake is evident in the weird tension of her fingers, unsure if they are prising the box open or desperately trying to shut it.  Rossetti loved the image of Pandora, returning to it over and over again... 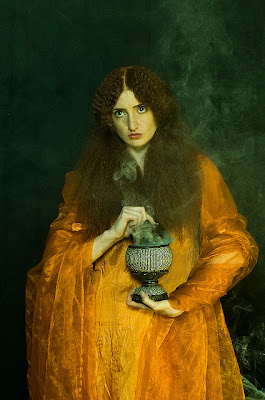 Splendid, anyway back to the story.  I began to think about Rossetti, Jane and Pandora and what it all meant.  For an artist to return to a subject repeatedly, you have to wonder if there is a meaning for them, a deeper resonance than just the making of beautiful images.  What do we know of Pandora?

In Greek Mythology, Pandora was the first human woman, created as a punishment for the theft of fire.  In most versions of the story, she opens the box, which is a present from the Gods, out of curiosity (those women!  T’uh), although in some stories Pandora just chucks the box down and lets out all the bad stuff in malice.  Look again at Rossetti’s paintings of Jane Morris – she is looking at us, or at some unseen thing, not at the box which she is opening.  We the viewer are the object of her curiosity, about how we will react to all the ills of the world spilling out between her long, agile fingers.  It is possible to read this as Jane (the muse rather than the actual woman) unleashed the ills into Rossetti’s life, which coincided with (but was not directly the cause of) his decline in mental and physical health.

The ‘feckless’ Pandora is a more traditional and common image: a nosy woman unwittingly destroying humanity, the Greek Eve, just because she couldn't resist a snoop.  It is easy to see a Victorian reading of female character in Pandora’s inability to do as she is told.  She is a cautionary tale for womankind, but also counterspeaks of the power of women.  She may be the incompetent wrecker of humanity, but that power is left in her hands.  Pandora, the woman, has the opportunity and the power to rain destruction down on everyone.

I love the variation in the vessel that Pandora opens.  While properly a jar, the phrase ‘Pandora’s box’ is a metaphor for something innocuous that contains terrible power.  In Church’s illustration, it appears to be ‘Pandora’s Ottoman’ and you get the impression that there is a vast amount of evil inside, enough to ruin the world.  I think the horror of opening one of the smaller vessels would be the magician’s trick of endless plague and terror pouring from the tiny box.

Also, it does seem rather necessary for Pandora to be naked, but I’m not judging.  Possibly she thought she’d left her pants in the box?  Anyhow, as we all know, the last thing out of the box was Hope.  Interpretation for this is that Hope is a salve for the evils, if not a cure.  It makes us resilient because we hope for the best in the face of all the evils that surround us.  There seems much argument as to whether life was ‘Hope’-less before the box was opened or whether we simply didn’t need Hope because it implies the need for a light at the end of a tunnel.  Mind you, look at Rossetti’s Pandora and I think a third query could be raised.  Maybe Hope is in itself an ill.  Did Rossetti ‘hope’ for a future with Jane but that hope was itself a torment?  Did Jane give Rossetti hope but that hope would have involved his friend being elsewhere, dead or absent and both of those tormented Rossetti?  I think a very interesting relationship that is often overlooked is that between Rossetti and William Morris.  We see only a seducer and a cuckolded husband, but there is something in Rossetti’s images of Jane that hints at a torment beyond adultery.  Again I have to mention Rossetti’s grief at the death of his wombat ‘Top’, just at the point when his relationship with Jane was moving into a second phase, more serious and destructive with the advent of Kelmscott and .  If Rossetti had no hope to be with Jane then their relationship would have remained an infatuation, but the hope of fulfilment meant the crushing of others in its path – the memory of , William and Jane’s marriage, Fanny’s hope of her relationship with Rossetti.

One thing seems sure, Rossetti’s Pandora has no mercy for us, no pity, no compassion.  That box is opening, ready or not.


Posted by Kirsty Stonell Walker at 14:57