Oz The Great and Powerful - Is it Just Me?

Do not read this before you have seen Oz: The Great and Powerful because it contains what may or may not be a spoiler.  You have been warned...

Is it just me or does the costume designer of the new Disney spectacular reveal a plot point a bit early?  As soon as I saw a central character's costume in this rather splendid blockbuster I suspected there was more to her than met the eye.  It all started in 1999 with one of my favourite films of all time, Sleepy Hollow...

As soon as Miranda Richardson appeared I knew she was evil even though as the wife of Baltus Van Tassel, she was being a sweet and lovely hostess.  It was the dress, the damn evil sorceress dress, straight from Sidonia Von Bork by Burne-Jones...

All those interweaving circles like a web, a mesh to ensnare, to entangle your victim; Sidonia wears her true nature not only on her sleeve but all over her skirt.  It kind of ruined Sleepy Hollow for me (even though it is a brilliant film) on the first showing, as I was not surprised when I should have been about an hour later.  Incidentally, I have a comic-book-loving friend, Claire, who feels the same about Unbreakable where she argues that the first time she saw one of the central characters, his costume completely gave him away and made the rest of the film fairly pointless.

So, on to today, and the Walker family are sitting in our local multiplex watching this rather lovely film, Oz: The Great and Powerful.  The magician, Oz crash-lands in the magical land that holds his name and is found by the beautiful and good Theodora in her red velvet ensemble.... 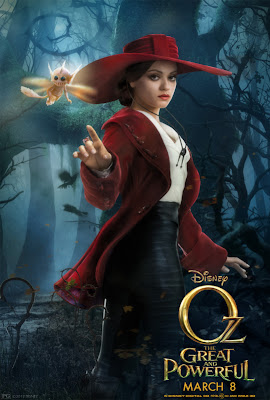 Back she and the magician Oz go to the Emerald City and meet the serious and innocent Theodora's rather more worldly sister Evanora... 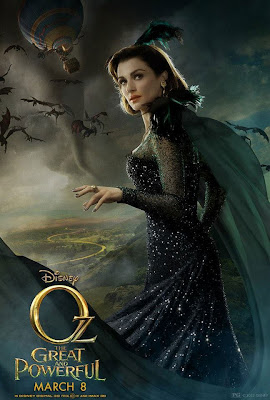 Right, I'm not spoilering anything to point out that you can probably work out which of these witches of Oz is the evil one by the poster.  Black sparkles? Check.  Dark nails? Check.  Rachel Weiss is definitely looking dodgy from the start.  However, not long after, Theodora has a little costume change... 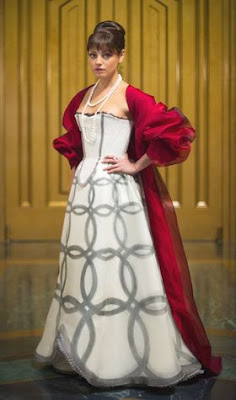 Oh come on!  I sat there thinking 'Oh, so Theodora is going to turn out to be evil then...'  Yes it's a bit more stylised but the costume designer has to have been influenced by Sidonia as well as wedding ring quilting. Or is it just a coincidence?  I grant you that it isn't quite as obvious as the Sleepy Hollow costume, but the moment I saw the interlocking circles, I knew things were going to get green and warty before we'd done. 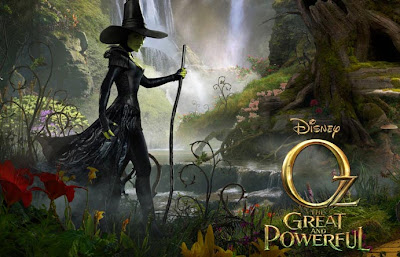 Curse you Pre-Raphaelite inspired costume designers!  You're as bad as the woman who sat next to me in The Sixth Sense and five minutes in said 'Oh, he's dead, isn't he?'

Thank goodness Kevin Spacey doesn't wear that dress in The Usual Suspects or else that film would have been over quickly for me...
Posted by Kirsty Stonell Walker at 18:22