I was once in the Daily Mail.  Mr Walker and I were waiting for a flight to New York in November 2001 when the plane crashed in Queens.  We were immediately surrounded by journalists who asked us repeatedly if we were afraid to die as terrorists would no doubt blow up our plane like they had just done again in Queens (which they hadn't but that isn't a good news story).  I muttered something about being utterly terrified and it was duly printed.  I sobbed for the entire flight. That is the point of today's post which has been inspired by the fuss over Hilary Mantel and the Duchess of Cambridge.

Many of you are writers, many write historic fiction or blogs or the suchlike, like myself.  Many of you would defend your subjects with 'terminal intensity' (as we say in the Walker Household), feeling an emotional connection with people who we could never know in real life but have built up a 'relationship' with through many years worth of research and work.  I am happy to talk at length and with vigor about Fanny Cornforth and feel I am qualified to do so.  I am always as careful as possible not to attack others unless I am sure of my ground and hope that I always, always make sure that you know that what I write is my own opinion that you are free to agree with or otherwise because, after all, it is only my opinion.

My chosen subject for my work is artists' models, with Fanny being my specialism.  I could give you my opinion of models today if you like: they are very pretty and I'm sure they are nice people.  Especially Andreas Dithmer, I'm sure he's lovely.  If you had asked me a couple of years ago what I made of Kate Moss, after she reportedly said 'Nothing tastes as good as skinny feels', I would have given you my very honest opinion indeed.  In my opinion that is a very stupid thing to say which buys into teenage girl fear of fat, reinforces women's body-hatred and generally adds nothing to people's life experience.  I remember the newspapers were outraged and much wailing and fist-shaking took place. 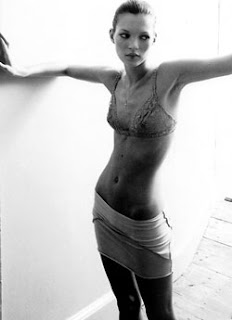 However, that wasn't what she said.

Look at the newspaper article I attached to the quote.  When asked if she had any mottos, Moss answers she has many and one is 'Nothing tastes as good as skinny feels', she then adds 'You try and remember, but it never works'.  That changes the point of her answer; she is pointing out how her job should rule her pleasures, but it doesn't.  For the record, my lemon drizzle cake tastes much better than skinny feels.  And so does Andreas Dithmer.

Back to today and Hilary Mantel.  In Royal Bodies, Mantel's lecture for the London Review of Books, she looked at past and present princesses/queens and people's obsession with their bodies and what came out of them.  She opens with a passage about her impressions of the Duchess of Cambridge, Kate Middleton as was, and how she felt no connection with a young woman who was projected as a clothes horse with a monarch-making womb.  None of this is ground-breaking, she merely reflected popular opinion which seems to be obsessed with the Duchess' weight and clothes.  If you read her speech, it is full of 'seems' and 'appears', leading me to conclude that Mantel was not attacking the Duchess as much as the constant bombardment of the public with the image of perfection, although this could be a little clearer.  She revealed odd moments of being in awe of the various royals, and goes on to talk about how the public still rake over the lives of the Boleyns (notably a couple of days ago I saw a headline about love letters between Anne Boleyn and her brother).  Very interesting stuff about the Tudors follows and then she finishes with a lovely bit about being compassionate towards people and stop picking over the Royals.

We all know what happened next.

I write this after reading today's back and forth of mudslinging.  For the record, I think the bits about the Duchess could be phrased clearer for the journalists who weren't willing to read to the end, but what she said and why is now not really the point.  It is older lady vs younger lady, fat lady vs thin lady, some rather horrible stuff about reproductive systems of both and all manner of worse.  I stopped reading the comments when I read people calling Mantel 'Worzel Gummidge' and the Duchess 'a brood mare'.  What is wrong with us?  I could quite happily blame journalists for pitching into the non-argument but the whole business can be filed under 'irony' if it wasn't so hideous.  Mantel's point was that we pick apart people like animals. Looks like she was right.

Why am I talking about this?  Well, it rang a chime with me as both a reader and a writer.  As a writer, you can never be too clear of your point and you should be aware the you do not exist in a vacuum.  Part of me expects that Hilary Mantel is unsurprised at the media storm, after all her piece covered the cruelty of the press and the mob.

As a reader, do not do what I did, which was to just read the newspaper and form an opinion immediately.  It's too easy to do that and now we have to be smarter and know that you can do better than read newspapers.  You can.  I promise you that each of you are capable of forming your own opinion far above anything that any of the papers offers.  You have the ability to read Hilary Mantel's piece and make up your own mind, you have the ability to not read speculation over womb-envy.  You do not need to enter the swamp of journalism.  Each and every one of you is better than that.

What she said.
Posted by Kirsty Stonell Walker at 14:10