We were driving to my Father's house the other day and Lily-Rose announced loudly that a combine harvester had cut all the wheat down 'to make Weetabix'.  While she was partly correct (not sure about the Weetabix bit) it was rather lovely seeing the fields of cut crops, a scene that always reminds me of my childhood (yes, I know, here I go again).  My Grandfather was a farm worker, and came from a long line of agricultural labourers, which explains why I look awful in ballet pumps...

My Grandfather's work with farm horses may have saved his life - when he went off to the First World War, he looked after horses for the cavalry which may have kept him relatively safe.  The horses above could apparently also find their way home from the pub of a Friday night should my Grandfather be unable to do so for himself.

Anyhow, as it is now Autumn (despite Summer making a surprise reappearance) I thought I do a piece on Victorian scenes of harvesting.  Get your scythe out and away we go!

Well, I've come over all Thomas Hardy and feel the need to frolic in the field with some rural types and a dog, while the middle classes look at our innocent pastoral fun while suspecting we are all inbred and a bit stupid.  It is a celebration of the bounty of nature and the work of the frolicking ring of country folk.  I like Egley and don't know that many pictures by him, so this was nice to see.  I love his sky.  Anyhow, this captures the feeling that nature is not entirely harnessed by man and still able to give bounty or famine, no matter what you do.  The rather pagan joy of the dancing group on the right contrasts with the group watching them on the left.  I think the woman at the front in the blue dress is supposed to represent the modern world as her dress is such an unnaturally vivid blue (as opposed to the sky which is bright but not 1980s electric blue).  Possibly Egley was commenting that the world was splitting into the old order and the new, maybe as a response to increasing industrialisation?  The children in the centre, on both sides, will have to deal with a world that has such a division, but they seem to be together, so Egley might have felt that the future was as bright as the woman's dress.

Again, the pagan, earth-worshipping aspect of harvest time comes to the fore with this piece which I almost didn't realise was about harvesting.  It's rather gorgeous but somewhat unsettling, especially the rather regal costume of the woman in the front.  I think I may have come over all symbolic, so I'll get back to the fields, especially as the bloke in the smock at the back is a bit scary...

Apparently 1854 had a good harvest.  It was so good that the barns were full and corn had to be stored in the arms of small girls.  Gorgeous Pre-Raphaelite image, involving two great Pre-Raphaelite details - a brick wall and the colour purple. Nice corn too.

I do like a woman with a big rake.  I believe that's what gentleman look for in a lady.  While I am in no way arguing with her 'Beauty' status, it does all look a bit grim and she looks as if she'd clock you one if you argued with her.  And she's stood in a rut.  It's not overly glamorous, is it?  Where is the sunshine?  The frolicking yokels with an accordion?

This is more like it.  I feel an accordion solo coming up! The colours are so warm and have that autumnal glow that makes the countryside seem to exude sunshine and baked goodness.  I would love to sit there with them, drinking cider and feeling the warm sun on my skin, unlike the Harvest Beauty who is stood in a gloomy ditch.  She should have picked a nicer day.

Harvest time gave painters the chance to paint at night in the silvery moonlight which casts a strange, magical light over those hard at work bringing in the harvest.  Ford Madox Brown did some astonishing harvest moon pictures, and I love the picture by Boughton, of this moon-maiden, gathering her crop at night.  There does seem to be a magic in the way that the moonlight creates a 'day' that only the rural people can use, as if they are creatures of myth, not really human but fairy-like.  I remember running around in a field under one harvest moon and being utterly fascinated by how light it was, and how I could overcome my utter terror of the dark by the light of the moon.

Possibly my love of a good harvest was influenced by this rather splendid building from my home town.  The Devizes Corn Exchange (or 'The Corny Bin' as it's also known) was the scene of many a dreadful teenage disco, and can also been seen in the 1960s Far from the Madding Crowd staring Alan Bates and Julie Christie.  Built in 1857, it is topped by a jolly statue of Ceres and is now very respectable inside.  Opposite it is the market cross.... 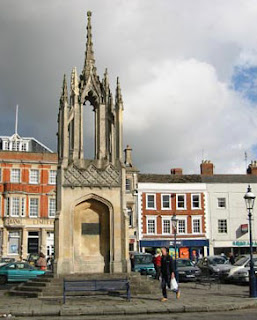 This was erected to 'commemorate' (if that is the right word) poor Ruth Pierce, struck down by God for wicked lying.  When buying corn with her friends around the old market cross someone had not put in their money. 'I put in my money,' said Ruth, 'and if I didn't may God strike me dead!'  Those are never particularly wise words to utter and naturally she dropped dead on the spot revealing her coins, still clutched in her hand.

Naughty Ruth.  The lesson we learn from that is not to lie.


Or if you are going to lie under no circumstances try and make God your accomplice...

Mind you, you get a nice cross out of it.
Posted by Kirsty Stonell Walker at 17:28