Pity me, dear reader, as I spent a goodly part of this week in pain due to my sciatic nerve going horribly wrong again (as it does on a fairly regular basis since the age of 4) and so was sofa-ridden and fidgety.  I was struck with inspiration - 'I know what will cheer me up, I'll look up a Stunner!'

Now, the lives of most of the Stunners are pretty much known, but I was tickled by the idea of finding out the life of this young lady...

Due to a bit of scandal and a bit of gossip, we know a thing or two about the temptress with the lamb on her lap.  This was Emma Watkins, and Hunt met her when he and Millais were staying at Ewell in Surrey.  Hunt was painting fields and Millais was painting rivers (can't imagine why).  According to Diana Holman Hunt, the Pussy Galore of Art Historians, Hunt saw two young women crossing the field and he thought one of them would be perfect for his shepherdess.  After they talked, the girl suggested that he should ask her mother if she was allowed.  Hunt went to Kingston (a nearby town) and saw the girl's mother and brother (apparently a seller of groundsel) and got approval for Emma Watkins (for that was her name) to be sent up to Chelsea, to pose in the studio.

This much therefore we know from what was passed down in legend from the early days of the Pre-Raphaelite Brotherhood and that important year of The Hireling Shepherd and Ophelia.     This is what I've found out from a bit of digging around in the records...

Emma Watkins was born 26 October 1832, and baptised the following May.  Her parents were Samuel and Anne Watkins.  Samuel was a 'labourer', which is a bit of a cover-all term (speaking as someone who comes from a long line of 'agricultural labourers', one reason why I can't wear ballet pumps).  She was the second daughter (Mary was older), and would be followed by Jane Maria in 1835 and finally Edwin in 1837.  Samuel seems to have had a fairly uneventful life, other than 6 months in prison in 1835 for assault, and died  before the 1851 census.  When Holman Hunt spotted the two lovely lasses, it is presumable that it was Jane and Emma he saw, and Anne and Edwin, the teenage seller of weeds, that he asked approval from.  Excuse the shameless use of Brown's Work, but it is a rather splendid image of a groundsel seller.

When Emma travelled up to London, she was somewhat of a hit with the boys.  Yes, I am rolling my eyes as I report that Rossetti liked her immensely and nick-named her 'the Coptic'.  Whatever this meant is somewhat lost on us, possibly he meant she looked like an Egyptian or like a Sphinx, or maybe he was just being a prat.  She travelled up the first couple of times with her fiance, who is described as 'a sailor', but then travelled up and stayed in the same lodgings as Hunt in Chelsea. Hunt's friends ragged him about a jealous sailor, who would come and violently reclaim his girl at any point, and used to storm up Hunt's stairs, hammering on his door and calling for her.  Gosh, those boys knew how to have fun.  Eventually the painting was finished and Emma returned to Surrey, never to be seen again...

Well, Emma did indeed marry her sailor.  In the Spring of 1852 she married Robert Seers, a Marine from Kingston upon Thames, and in 1853 their first child was born. By the census of 1861, Robert had become a sail-maker and Robert Junior (born in 1853) had been joined by James (1855), Alice (1858) and George Thomas (1861).  Somewhen between 1855 and 1858, the Seers family had moved from Kingston upon Thames to Long Ditton, a nearby village, possibly coinciding with Robert's retirement from the Marines.

Emma's part in the Pre-Raphaelite story was not quite done.  The 3rd April 1858 edition of the weekly magazine Household Words printed a story entitled Calmuck, about an artist called Mildmay Strong who seduced a country girl he was using as a model, despite her protestation that she was engaged to a jealous sailor.  Mildmay Strong's friends ran up his stairs and impersonated the jealous sailor for larks...sound familiar?  Holman Hunt was livid (as was Annie Miller) and threatened to sue, fearing his reputation was in tatters.  Even his Landlady, Mrs Bradshaw was indignant, due to the description of her 'fictional' lodgings as shabby and miserable.  Emma Watkins still stayed with her when her husband was at sea, in 1858, so it can be assumed that Emma may well have heard of the business, but whether her 'jealous' sailor husband heard, who knows?

So much for Holman Hunt and Emma Watkins.  What of Mrs Robert Seers?  Emma, her husband and their children seemed to lead a fair typical life of that time.  Robert Seer seems to have held a number of jobs, including 'labourer' and died aged 72 in 1897, still living in Surrey, back in Kingston upon Thames.  The children married, had children of their own and lived on into the twentieth century.  But what of Emma? 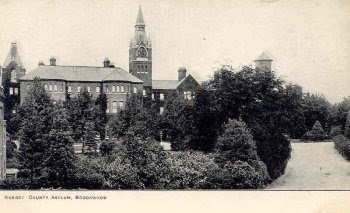 The Seers seem to vanish from the records between 1870 and 1891, but when they reappear the family has fractured.  The children were married and settled, but Robert was alone.  Emma had been committed to the Brookwood Asylum, County Asylum for Surrey, servicing 'Pauper Lunatics' (which is a term that worries me no end).  She would live out her remaining years as an 'inmate', then a 'patient' (terminology changing significantly, inferring the change in attitude towards the insane).

Emma died in 1914.  I have to say I was rather saddened to think of the hearty, ruddy country wench ending her days in an asylum.  Although the pictures and the descriptions make Brookwood seem rather modern and progressive, with talks of a band and a ballroom for the patients, it was still a Victorian asylum and all that entails.  I have no idea what Emma's illness was, but it is a worrying thought that she was locked away for over twenty years.  Maybe it's better to just think of her, for a short while, reclining in Holman Hunt's studio, being admired in comfort by a bunch of silly boys with a talent for rather splendid paintings...
Posted by Kirsty Stonell Walker at 20:51