I think one of the things I try hard to accomplish in studying art is not only to understand what pictures mean to me, but also what pictures meant to others, especially the contemporary audience.  With the Victorians, it can be easy sometimes to see their concerns in their appreciation of a work of art, but sometimes the response to a painting can seem curious and unexplainable.  I am made very happy by discovering a new angle to approach familiar pictures, and this weekend I got lucky. 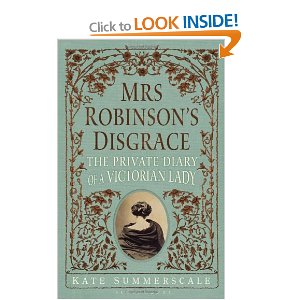 I loved The Suspicions of Mr Whicher and was delighted to hear that Kate Summerscale had written another book.  Mrs Robinson's Disgrace is fascinating, and there is an interesting section on George Combe, the Father of Phrenology. 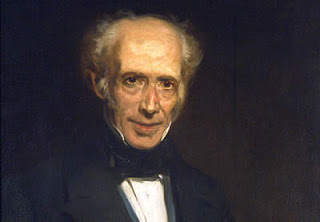 Mrs Robinson, of the title, became good friends with Combe, and he offered an explanation to her problems.  It was all in her lumps and bumps, more especially it was in her cerebellum.  In Combe's book of 1838 A System of Phrenology, he offered a reading of character through the size and shape of areas of the brain and by extension, the skull.  To Combe, the character of a person, their very essence and nature was not in something as wishy-washy as a 'spirit', it was in the far more tangible, and feel-able, skull.  Combe was a very influential and controversial figure, far more than Darwin, even though he remains relatively unknown today.  Combe's book The Constitution of Man sold 350,000 copies from 1828 to 1900.  He held the radical view that it was the natural world, not God, that ruled humankind, and everything could be understood if we first understood nature.  His work encompassed Phrenology, commonly known as the reading of bumps on the head.  If you've been into a reproduction furniture shop, you're bound to have seen a phrenology head... 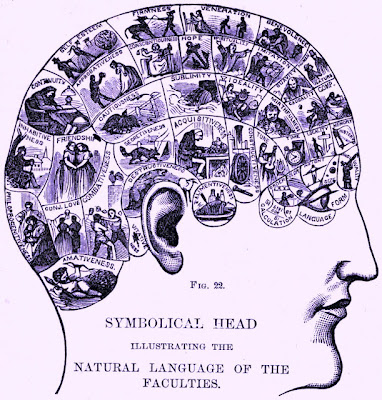 This one is a bit swish, as it has explanatory pictures.  Look at the nape of the neck: there is an area called 'amativeness' which has a nice little cupid, but is not so much about love as lust.  The amative area is seated in the cerebellum, which as you can see is just above the hollow at the nape of the neck and has a bearing on how thick the throat is.  The thicker the throat, the more pronounced your amativeness is, and the more trouble you no doubt are.  Men have larger cerebellum than women, and traditionally lust-fuelled animals like bulls, rams and pigeons have swollen necks.  Swollen with lust!  At it like pigeons!  Sorry, I am frankly puzzled by the mention of pigeons, but I'll move on.

In Summerscale's book, poor Mrs Robinson has an enlarged cerebellum, which obviously does her no good at all.  Amativeness, when enlarged in a woman, leads to all manner of awfulness.  There are some quite peculiar descriptions of women whose cerebellum becomes enlarged and hot, causing them to throw their heads back.  Women with thick throats were vulgar and base and no doubt slaves to their baser urges...Oh, remind you of anyone?


If there was ever a man who liked a big-necked girl, it's Rossetti. He is throat obsessed.  In his poetry he talks of 'enthroning throat' ('The Portrait'), Jenny's 'long throat', 'growing throat' ('A Last Confession'), and how he'd like to kiss his muse 'Up your warm throat to your warm lips' ('Youth's Spring-Tribute'). Saucy devil.  In an echo of a Combe story about a lusty widow who went into a seizure of naughtiness and lay rigid on the floor in ecstasy, in the poem 'Rose Mary' Rossetti describes how his muse 'stretched her thrilled throat passionately, and sighed from her soul...'

Reading criticism of Rossetti's paintings, one theme reoccurs.  It's hardly surprising, given that an awful lot of his subject matter is three-quarter length portraits of women, that emphasis tends to be given to the exaggerated necks of his muses.  Comments about the women with 'straining throats', 'dislocated throats' and how his exaggeration of women's necks showed defections in his drawing techniques.


Looking at these easily comparable images of Jane Morris, it's obvious to see how her throat has been exaggerated, possibly more than any other part of her anatomy.  The question therefore is did Rossetti and his critics know of the phrenology connotations?

As Combe's books were so incredibly widely known, it's hard to imagine that Rossetti and his critics were oblivious to the cerebellum and amativeness, and the pleasures and dangers of thick-necked ladies.  There is an eroticism to Rossetti's female subjects, and from his poetry, it's possible to centre that charge on the 'thrilled throat' of his beautiful women.

Taking this further, how much can Fanny Cornforth's reputation be ascribed to phrenological readings of Rossetti's art?  She is undoubtedly the object of much lust in paint, and words like 'vulgar' and 'licentious' are keynotes in her character, as portrayed by her biographers, both contemporary and modern.  What if these qualities were based on an exaggeration of an artist and repeated as fact ever since?

In conclusion, Rossetti was a man who knew about amativeness and knew about women.  What he didn't know about was how allegedly bad it was for women to exhibit aspects of lust, sexual longing and physical expressions of love.  George Combe himself admitted that his own amative region was small and he had not know the 'wild freshness of morning', even when young.  Mmmm, I love the smell of euphemism in the morning (even if I'm not getting any wild freshness).

What once more marks Rossetti out as an atypical Victorian is his refusal to brand his thick-necked lovelies as anything but desirable.  While his critics shook their heads at his ruinous nature, his shabby morals and loucheness, Rossetti was celebrating the sexual urge in womankind, encouraging his tower-necked lovers to be hot of neck and hot of lips, and artistically reaping the rewards of such behaviour.

Good for him.
Posted by Kirsty Stonell Walker at 22:21