Miss Chaseley Lives for a Day

There are moments when I thoroughly believe that I am a person who was born in the wrong century.  The way I act, the things I spend my time thinking about, some of the things I consider a good time, all lend themselves towards an earlier era.  Not only that, but at times I find myself utterly befuddled by modern life; it's too loud, too fast and not to my choosing.  I also seem to have a number of friends who are equally plucked from another century, so I know I'm not alone.  This brings me to the subject of today's post...

Maxwell Armfield was born in 1881, in Ringwood in Hampshire.  From a Quaker family, he went to school first in Somerset, then on to the Birmingham School of Art.  The head of the school at that time was E R Taylor, who had employed staff who were also working for the Kelmscott Press under William Morris.  If this wasn't enough to influence young Maxwell, he also received tuition from Joseph Southall, in the magical ways of tempera painting...

After leaving Birmingham, Armfield travelled to Paris to study and then on to Italy, where he found his spiritual home.  He returned to England, married a young playwright called Constance Smedley and together they travelled to America, before returning to England in the 1920s and living in the Cotswolds, the south coast of England, and then finally in London.  Constance died in the 1940s, but Armfield lived on until 1972, exhibiting until his death.

All fine and straight-forward so far, this is just a story about an artist who found his groove in 1890-something and didn't feel a need to change.  However, there is more to Maxwell Armfield than meets the eye.

I knew Armfield from the front cover of my beloved copy of The Picture of Dorian Gray by Oscar Wilde. 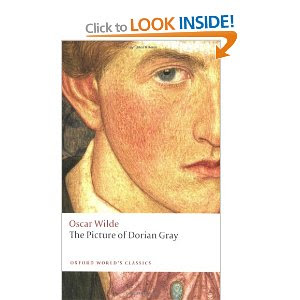 Several editions of the book have used Armfield's turn of the century self portrait as its cover.  I have been researching a separate post on the use of Victorian art on book covers and I think this is a very interesting use of the portrait.  I find that the portrait brings Oscar Wilde to mind, but not necessarily the character of Dorian Gray.  Armfield seems to portray himself as an aesthete, a young man of artistic nature, pink of bow and delicate of nature.  Like Oscar Wilde, Armfield was a married homosexual, one of those marvellous Victorian contradictions that we all know and love, and possibly it is Armfield's connection spiritually to Wilde that led to the picture being chosen.  I find it interesting that Duncan Grant would not mix with Armfield as he found him too 'of the last century', 'too Ricketts and Shannon'...

Despite becoming established as a successful artist and illustrator on the other side of the First World War, Armfield was already branded as being old-fashioned and a relic of a bygone age.  Looking at some of his works, I'm not altogether convinced that Armfield was unhappy about this...

Outside, post-war (and this is Second World War) New York bustles along, but in Armfield's world, a fair princess plays Bach on a harp.  If that isn't a battle-cry for mental time-travel, I don't know what is.  Outside, it's all smoke and sky-scrapers, inside delicate fingers pluck delicate strings.  Sigh and swoon.


Beginning his career with this Jane Morris look-alike, being courted by an aesthetic young man over tea and flowers, Armfield's art is very civilised, very dignified.  We have love and passion, but we also have afternoon tea out of an exquisite pot (which in truth is far prettier than her suitor).

Despite being enamoured of the medieval/renaissance maidens of his beloved Italy, there is a strong vein of the modern urban in his art, which Armfield marries together with grace.  Like the harp-playing angel in New York, the Victorian woman in black sweeping garb looks at once both incongruous and in place as she shelters on the new-fangled tube platform.

It is this delicious mix of old and new that brings me to my picture for today, which is Miss Chaseley on the Undercliff.

The Armfields stayed in Boscombe, part of Bournemouth, in the late 1920s and Miss Chaseley was their housekeeper.  She had owned a newspaper shop in London and had retired to the south coast, where the Armfields had encountered her.  The artist described her as a 'sort of Dickens character', and her face 'evidenced an unusually self reliant and fine character moulded through years of estimable work.'  When a curator was reported to have described the picture as being typical of old biddies in Bournemouth (which is renown as a retirement town by the sea), Armfield reacted angrily, saying that there was more to Miss Chaseley than met the eye, that she embodied the best of a previous era placed in a modern setting.

The reason I love this picture is that at first glance it is just a picture of an old woman in black, sitting on a bench, but then you look closer.  Miss ChaseleyChaseley's gown: she is in the wrong clothes for her time.  Old and new collide in the newspaper by her side: the heavy gothic font spells out 'Neo' (possibly a compression of 'The Echo', the Bournemouth newspaper, with the 'h' of 'the' becoming an 'n' in the fold).  The old font spells 'new', and the collision of these two notions is the keystone to the image.  Miss Chaseley is the old world planting herself in the new, but why is Miss Chaseley so old-fashioned?

Look at her hand and try and ignore the fact that she is possibly giving us the finger.  On Miss Chaseley's left hand is a ring.  This is the only ring she wears and could be argued as being her wedding ring, yet she remains 'Miss' Chaseley.  Couple that with her deep mourning and it could be imagined that her husband died, possibly back when her mourning clothes were in fashion.  I propose that her husband died at sea, as the little boy next to Miss Chaseley wrestles his toy boat on the choppy pond, but there is no wind to cause those waves.  Neither the flappers or Miss Chaseley have any evidence of a breeze disturbing their apparel, yet the toy boat lists dangerously.  If there was a Mr Chaseley, then possibly he was lost at sea, his boat sinking and no help arriving, signified by the life-ring, untouched behind the pond.  I also wonder if Armfield is linking Miss Chaseley's unmarried state to that of the flappers, the post First World War generation of women who outnumbered the potential husbands.  This predicament is highlighted by the two women and only one man in the background.

This is not a picture of a sad old woman.  Armfield describes Miss Chaseley in terms of dignity and bygone virtues of character and esteem.  Above Miss Chaseley rises the cliffs in Bournemouth, unmovable, unshakable.  Whatever life throws at the spinster (or widow), she greets it with a sort of solid stoicism that Armfield admires without disguise.  Miss Chaseley is not old-fashion, she is eternal, she is the best of all time.

What I love about Armfield is that he obviously didn't care about fashion.  A bit like Miss Chaseley, he became the unchangeable, the eternal, painting harp-playing damsels in tempora as the world entered the atomic age.  I disagree with Duncan Grant, that Armfield was stuck in the last century; on the contrary he brought it with him and forced his audience to embrace his vision of mixed-era magic, and when it is so beautiful, so moving, who can resist?
Posted by Kirsty Stonell Walker at 20:29