The Painted Past: Unforgettable and so Behead-able

Welcome to the last post of my three-day weekend of art and history, I hope you’ve enjoyed the murderous and bloody fun as much as I have.  Links to the Pre-Raphaelite Sisterhood’s reading project and the splendid book of the month The Arrow Chest will be at the end of this post, so on with the history!
Until I wrote this post, I knew very little about Lady Jane Grey.  I knew only one thing really for sure: that they cut her head off.  To be honest, if you relied on Victorian artists to inform you of her life, there is precious little else in terms of action, but my God, the images are amazing.
This has to be one of the most famous history paintings of the nineteenth century, and it’s by our old friend Paul Delaroche.  It is breath-taking in its simplicity and power.  The mesmerizing figure of Jane in the centre in pale silver, shines ethereally as she is lowered to the block.   All the tension in the girl are expressed by her tremulous fingers, outstretched and you can only imagine how she will feel as her hand touches the block it hovers above.  Behind her, the heap of ladies-in-waiting collapse into horror and grief.  Waiting on the right, in blood red tights, waits the axe man.  That is a big axe…
By placing the action inside, rather than out on Tower Green, Delaroche darkens the scene, making it claustrophobic and drawing you back to the central figure.  The ladies-in-waiting almost seem to be trying to escape the closing walls, pressing them closer to the horror.  The only thing I don’t understand is the straw, catching the light below that dark, solid block…
Well, George Cruikshank doesn’t pull any punches.  Yikes, this is a snapshot of horror and I suddenly understand the presence of the straw on the scaffold. Mmm, absorbent.  Compared with Delaroche, this is more of an explanatory illustration, rather than giving any interpretation or opinion.  If ever I become queen and then get beheaded at least I know what to do.  I do have a fairly long neck and was once told I had ‘a good neck for beheading’.  Look, I don’t get many compliments, so I’m taking the praise, however disturbing.
Lady Jane, the Nine Day Queen was a perfect Victorian heroine.  She was ‘prevailed upon’ to take the crown, presumably against her naturally meek, feminine nature and was beheaded due to the vice and ambition of others.  Charles Dickens wrote in his Children’s History of England that the axe that beheaded 16 year old Jane ‘never struck so cruel and so vile a blow as this.’
Jane presents a very simple picture to the Victorians.  She is a young girl, having greatness thrust upon her, and not in a fun way.  I’m so sorry, it’s all this pious loveliness, it’s putting me on edge.  Take this for example…
Oh look how marvellous she is, staying in and reading Plato while her friends have gone off hunting.  How educated and refined! I must immortalise her for all eternity, thought Roger Ascham.  So here we have one of many pictures of ‘Jane the Scholar’, happier with her books than with hunting.  She’s obviously too delicate and feminine to be up for a scrap, which is probably why she didn’t stand a chance when this happened…

Oh, go on, go on, go on, you know you want it…Look at those scheming men all pushing that poor young girl into being Queen.  Tudor Dads have a lot to answer for.  I do think, especially in the Leslie painting, Jane is thinking ‘Ah, why not, what’s the worst that could happen?’
Now we enter the ‘Lady Jane in Captivity’ period of her brief life. She is, in turn, despairing and stoical, but I particularly love the Cattaneo/Josey image as it is almost religious, reaching for heaven to save her as she seems to swoon with the horror of it all.  It's interesting how many of these paintings were available widely as engravings in books, to further the 'Cult of Jane' among an eager Victorian public. 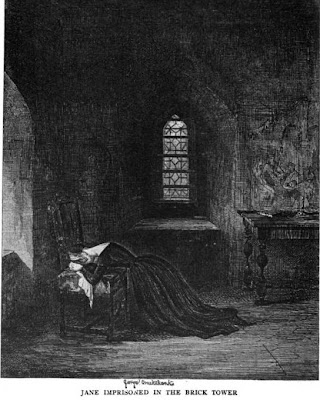 Despair, despair.  Jane is humbled in her little tiny room, betrayed and abandoned by the people who pushed her into accepting a poisoned crown. Compared to how many people wanted to be near her before she was imprisoned, she is often pictured quite alone in her cell.
Well, not quite alone.  The picture of Jane and Feckenham makes me think of Mary and Knox.  Jane seems to be holy enough, literally glowing with spirituality as she is prepared for her beheading.  The swathes of red hint at her spilled blood and possibly her status as a martyr.  Is it just me, or does Jane appear to be rolling her eyes. I find the hand gestures in this picture very interesting: the guard has his right hand in an almost threatening position as he looks down on Jane, but without hostility.  Maybe he prefigures the axeman, a man who will kill Jane without feeling any hatred against her.  Feckenham’s right hand seems to be making an emphasising gesture, but also could be seen as ‘chopping’, while Jane prays. And prays. And prays.
We finally arrive at our beginning.  Jane was beheaded when she was just sixteen, and passed into history as a young girl who was Queen for nine days.  Sixteenth Century author John Fox wrote in Acts and Monuments ‘Let this worthy lady pass for a saint: and let all great ladies which bear her name imitate her virtues’.  This was still standard Sunday reading for the Victorians and no doubt fed an image of a good girl attaining saintly status.  It doesn’t hurt that Lady Jane Grey is an example of a cautionary tale of a woman who allowed herself to be persuaded into disrupting the ‘natural’ order of the monarchy by the ambition of others and paid for her ‘folly’ with her life.
Well, as my middle name is Jane and I have a very choppable neck, I’m off to imitate the virtues of being a sixteen year old Queen.  Remember to join the fun with The Pre-Raphaelite Sisterhood reading project at www.preraphaelitesisterhood.com/?p=1820 and buy Robert Parry’s beautiful and thrilling The Arrow Chest at  www.amazon.com or www.amazon.co.uk (or an Amazon near you!)

Posted by Kirsty Stonell Walker at 12:44