In Bed with Byam Shaw

It feels like forever since I wrote my last blog, which, being sensible, it wasn’t.  It was only the end of last week, but I’m used to writing this every day.  Presently I am engaged in painting our living room, the room where I write, so I am forced to type this in bed.  I am hoping Mr Walker isn’t planning on coming to bed any time soon as his side is currently filled with books.  Anyway, hello, I’ve missed you and I want to talk to you about one of my favourite lesser-known painters, John Byam Liston Shaw.
Mr Walker has now come to bed and grumbled because Lionel Lambourne’s Victorian Painting is where he should be.  T’uh.  Anyway, Byam Shaw…if Byam Shaw had been born forty years before he was, I think Millais would have had a serious run for his money in the ‘child prodigy’ stakes.  As an eight year old, Byam Shaw was thrown off a donkey and badly hurt his left arm.  His response when asked if he was alright was ‘It’s not my drawing arm’.  Ah, kids.  Anyway, Byam Shaw is one of those artists who I have loved for ages but not worked out that all the pictures are by the same artist.  He doesn’t crop up in big exhibitions very often, but I’m guessing that most provincial museums have one of his art works, if not two – just checked with Mr Walker and the Russell-Cotes Art Gallery & Museum have two.  Gosh, our pillow talk is saucy.  Anyway, the thing about Byam Shaw is that he is nice and Pre-Raphaelite but I didn’t realise exactly how deep his leanings went.  Take for example one of his well-known images The Blessed Damosel (1895). 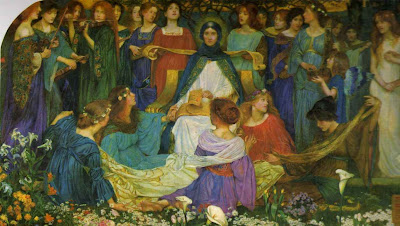 Now, I hadn’t put two and two together but of course this is a Rossetti-inspired image.  The two stanza’s from Rossetti’s poem that accompany the image draw attention to the five handmaidens of Mary, all sewing the heavenly birth-robes, while a choir sing and a couple are led through to heaven.  It is at once a traditional triangular composition, but also packed with people, filling the frame.  Despite the melee of figures, Mary stands out from the crowd in her absolute stillness.  He was only twenty three when he painted this and it was hung in prime position, on the line, at the Royal Academy Summer Exhibition. Blimey.
I think my problem with Byam Shaw in the past is that I have thought his paintings were by other people.  Take for example the magnificent The Queen of Spades  (1898).  For some reason I thought this was by Gotch, I think because of the weird singing girl on the floor, but I love the slightly broken symmetry of the composition, with the guard looking over.  It’s so serious, compared to The Queen of Hearts which is skippety madness, with giggling and girliness.  There ain’t no giggling here.  Maybe the girl with the elaborate banjo isn’t very good. 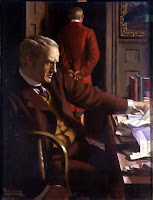 It isn’t all Gotch-esque women in big dresses and vaguely triangular hair.  I saw ‘and he begetteth a son and there is nothing in his hand,’ when it was exhibited with the Forbes collection about a decade ago and its tight framing blew me away.  The general sense of a father troubled by his son, a quarrel, the father thinking deeply about the financial implication of his family’s behaviour are all apparent without intimate knowledge of the passage from the Book of Ecclesiastes.  Byam Shaw painted a series of works from Ecclesiastes, little moral pictures, with their stories apparent but not sledge-hammered.

As I am typing this, I hope that I am able to find a colour reproduction of the next picture I want to rave about, as I only have a little black and white one in my collection, but even so…When Byam Shaw became engaged to the charmingly names Evelyn Pyke-Nott, he painted a 2.5m tall portrait of her.  This massive picture is a tribute to the love of the artist for Miss Pyke-Nott, as she sports his emerald and ruby ring.  The frieze about her head shows her family home and her past-times, riding, painting and croquet.  It has a splendidly medieval-revival, Gothic feel with an almost Tissot-esque woman in plain, stunning fashion, standing in a stately, yet oblivious manner.  Stunning.
Finally, I have to talk about possibly the best known of Byam Shaw’s works today.
Appended to the title are two lines from Christina Rossetti: ‘Last summer green things were greener,/ Brambles fewer, blue skies bluer.’  This painting reminds me of how I got Mr Walker to watch The Sound of Music with me (he’d never seen it) by promising him it was a war film.  This is war art but without the fighting.  The figure, dressed sombrely and most likely in mourning, looks over a pond in thought.  Is she thinking about the last time she stood there?  Is she thinking about the person she stood there with?  When I first saw this picture I remember thinking ‘Has she lost her dog?’ as it is such a strange scene, but like the best narrative art, you slowly get a sense that all is not what it appears and that something has happened that affects the protagonist.  It is an interesting picture of the ‘home front’ in war, well before such a thing had any sort of resonance.  The idea that a war, thousands of miles away, could have a casualty in some sleepy backwater of is a very modern notion.  Byam Shaw has tackled a very female response to conflict in an age when nice middle class girls had no truck with war as it got in the way of needlework and looking pretty.  Set this picture fourteen years later and you could speculate that the young woman is thinking about her chances of marrying, or the chances that her husband will come back alive.  This is a picture of a woman completely at the mercy of politics, her happiness destroyed by a colonial conflict.  I will come back to colonial conflict another time, but I applaud what is a proto-feminist image, realistic and horribly every-day.  In an age when images of female ruin were common place, think Found or Past and Present, it makes a refreshing change to find a woman ruined by war, possibly not a consequence of conflict much considered otherwise.
Take yourselves off to your local museums, or online, and find the beautiful works by John Byam Liston Shaw, you’ll be surprised how many you know.  I better get some sleep as I have to scrape down floor boards tomorrow.  Night night…
Posted by Kirsty Stonell Walker at 13:03