The Preciousness of What Survives

Sometimes the most beautiful things are stumbled upon when you least expect it.  It was so with an obituary of Edward Burne-Jones, found by a turn of a page in Volume 4 of The Architectural Review from 1898.  I was admiring the various plates of illustration of buildings, new in their construction yet built in the fabulous Arts and Craft style.  'Exciting and radical developments' in architecture referred to Art Nouveau and the more organic, rounded styles of houses, which is rather gorgeous indeed.  Anyway, I was flipping through admiring all the houses I wanted to buy and I came across an obituary, written by the editor of the Review, Henry Wilson, together with an illustrated piece by Harold Rathbone.

Burne-Jones died in June 1898.  The Review covered the months June to November of that year.  Henry Wilson and Harold Rathbone were both friends of Burne-Jones which is why I think this piece is so moving.  Starting with Wilson, he was an architect, jeweler and designer, who became the first editor of the Review in 1896.  Wilson had not worked directly with Burne-Jones, but they had both worked on buildings such as Holy Trinity Sloane Street, with Burne-Jones providing designs for stained glass and Wilson designing interior fixings and metalwork.

The aspect of the obituary that is most striking is that it isn’t so much a review of Ned’s life but an examination of the nature of such a loss.  Published at the end of 1898, almost six months after Burne-Jones' death, Wilson acknowledged that his obituary came late, ‘when the funeral pyre is out and the last valediction over’, but his piece is more than a mere list of Burne-Jones’ achievements.  It would be easy to feel that no words could possibly express the loss: imagine that you had lived in a time when the paintings of Burne-Jones emerged, one by one, each a thing of inexpressible beauty, then one day there would be no more.  Wilson lists King Cophetua, The Chant d’Amour, and The Beguiling of Merlin and states that their ‘mysterious completeness of realisation’ makes one think of ‘still waters tree-shaded under evening light’. The afterlife of Ned’s work is a key theme, as Wilson feels his obituary is almost superfluous – Burne-Jones is his own obituary: ‘Of all men, the artist perhaps need fear oblivion least…he writes his memoirs on our minds and his works are reimprinted for many generations.’ As Wilson says ‘Death has this sweetness, that, while it removes a life, it makes a memory’ and in this way Death has not robbed the world of Burne-Jones as much as completing the collection of his work, presenting it to us, his followers, as a fait accompli to be appreciated in its entirety.  There is a sense that possibly we could not appreciate the man in his lifetime, but after his death we can step back and see the whole in all its splendour.  In this, it is not simply an act ‘to lessen the sense of loss by showing the preciousness of what survives’, but a defiance of death as the loss of Burne-Jones or even of his work will never remove the influence, continued by heredity.

On the facing page was placed this: 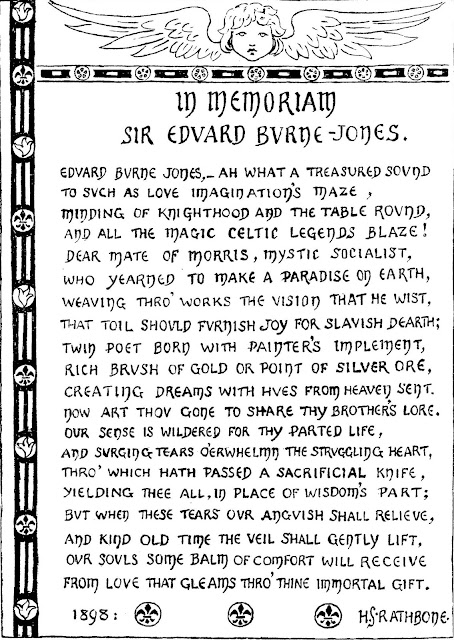 It was what caught my eye.  Stark and beautiful in its monochrome rendering is a poem dedicated to Burne-Jones’ memory, his ‘Immortal Gifts’, echoing Wilson’s assertion that the man’s soul is transported in death to his works and therein is his immortality.  The reference to Morris, who had died only a couple of years previously, brings forward the vision of two men working for a better life, ‘a Paradise on Earth’.  Burne-Jones’ attitude to his knighthood, not to mention the attitude of his ‘friends’ over the matter, has always meant that it’s not really considered a true part of him, but Harold Rathbone pairs the notion of Arthurian chivalry and magic with knighthood, Burne-Jones’ knighthood, then it is touching to think that he was considered their Arthur, their unwilling, self-effacing leader, but a leader none the less.

The reason I found the obituary so interesting is that it speaks not only to the contemporaries, those that knew Burne-Jones, but also to those of us who only know him through his work.  Obituaries, more often than not, are rather dry affairs, listing a proud scroll of achievement by someone who obviously feels they need reciting.  The beauty of Wilson and Rathbone's joint piece is the emotion barely hidden, and the loss felt and defended.  Wilson accuses fellow architects of not giving Burne-Jones a building to make his own, to cover the surfaces with his art and skill, crating a 'priceless treasure house'.  He regrets that 'only when Death stoops from her sky and swings him from our sight do we realise too late our opportunities'.  Though Burne-Jones is gone and you and I will never meet him, never see a new work come from his brush, his art is still around us and the influence is in our hearts forever.
Posted by Kirsty Stonell Walker at 13:39