Although I keep an eye on the new releases of books about Pre-Raphaelite subjects, I had completely missed mention of the book I'm reviewing today until David Thompson emailed me about it over on my Facebook page, The Stunner's Boudoir.  I immediately begged a review copy from the publishers... 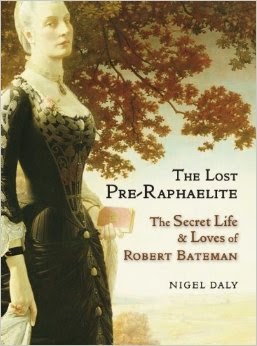 When offered a book about a 'lost' Pre-Raphaelite artist called Robert Bateman, my arrogant-cow attitude immediately said 'Well, I've heard of him, how lost can he be?' Indeed, I've used his best known paintings here on the blog before, especially this one:

I've always loved this picture because you can barely see the subject.  Anyway, my arrogance aside, that is not the point of the book.  Certainly this is an account of a Pre-Raphaelite artist who is not as well known as the others, who fashion and time left behind a bit, but there is more in the attribution of 'lost' then mere reputation.

Robert Bateman was an artist in the second wave of Pre-Raphaelitism.  He was a member of the Dudley School, a grouping of artists that included Edward Burne-Jones and Simeon Solomon and he moved to being a part of the Grosvenor Gallery set.  His artistic output appeared spasmodic and he also dabbled in architecture, sculpture and botany.  He came from reasonable amounts of money, mixed with people with reasonable amounts of money and many of the names in the story will be familiar to you.  He married later in life to an older widow and they died within a month of each other in the 1920s.  These are the facts and it's easy to see why Bateman may have been overlooked in favour of other artists whose lives had a bit more public spice, shall we say.  Mind you, isn't that so utterly true of life, that those who clumsily and publicly mishandle life's eventuality are given far more notice and public worth than those who just get on with things with rather more dignity.  The early mention of Burne-Jones and Solomon in the book makes complete sense as you progress through Bateman's life and secrets.

Bateman's artistic reputation was pretty much lost between the wars.  He doesn't appear in my early 20th century Pre-Raphaelite books, although some really random people are present in the Percy Bate one from 1910.  I suppose I'm lucky enough to have started my Pre-Raphaelite research (and life) after the 1960s when more of the artists were rediscovered and written about.  Bateman himself enjoyed a brief rediscovery in 1966, and his paintings of a dead knight and some mandrake pluckers started appearing in books and exhibitions in the 1990s. But you wouldn't think there would be enough to hold your interest for over 300 pages...

Firstly, Nigel Daly is a wonderful writer.  I would not have loved this book half as much if it wasn't for the pace and humour of his narrative.  This is not a straightforward biography and galloping through it with such charming company is worth anyone's time, in my opinion.  In essence, this is a book about two lovely chaps buying a house and uncovering a mystery.  Anyone who looks at a mad old house in an advert and responds 'We'll have to buy it, obviously' is welcome to come round for tea whenever they fancy it.

The adventures of Nigel and his partner Brian (who restore period houses when they are not embarking on art mystery capers) are what makes the book.  They are experts in houses and the details of the buildings they visit make you feel like you are there beside them.  However, the knowledge they have about the Victorian art scene is learnt as the story goes on.  I thought this would irritate me, that the reader would be informed of 'discovered facts' as if no-one else knew who Burne-Jones, Simeon Solomon etc were.  I could not have been more wrong.  The sheer joy of discovery, the seeking to understand, to place in context is refreshing.  There is no pretension that the author knows more than the reader, just an exuberance of sharing, of us all tumbling along towards the final chapters by which point I was too emotionally involved with everyone not to cry a bit.

There is only so much I can tell you about the revelations of the book because there are twists and turns.  I agree that it is like a real life Possession by A S Byatt, or That Summer by Lauren Willig, where the art leads you to some real life revelations that you don't see coming at all.  Yes, there are things I wished had been explored like the connection to the Souls (even though Nigel and Brian visited Mells) and the final chapters are quite speculative. Saying that their reasoning is well argued and very persuasive and it's one hell of a story. I can only urge you to buy this wonderful book and be swept along by it.

Buy the book here (Amazon US) or here (UK) and love it as much as I did.
Posted by Kirsty Stonell Walker at 13:32