Happy Birthday Ned, All is Forgiven!

Happy Birthday, Edward Burne-Jones!  He's 180 today, and due to my preference for older gentlemen, I think he's rather swoony. 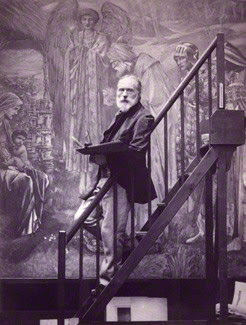 As some of you may know, I went up to the exhibition on Burne-Jones' drawings at the Lady Lever Art Gallery at the weekend. 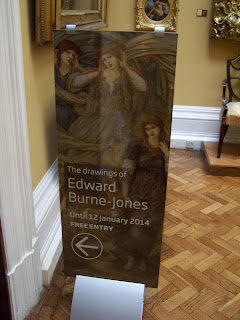 It was very beautiful, unsurprisingly so, the highlight of which was the enormous watercolour of Sponsa di Libano (The Bride of Lebanon)...

Gosh, it's enormous and beautiful!  Mr Walker was especially keen to see it as the Russell-Cotes has a pencil sketch of it.  The rest of the exhibition is splendid, the drawings and the chalks were outstanding as you would expect.  It wasn't as big as Birmingham's recent Pre-Raphaelite Drawing show, but then it was free to go in and so I wasn't disappointed at all.

However, I have to make a bit of a confession.

I'd already fallen utterly in love with a painting before I got into the exhibit.  In fact, it was all I could think of all the way round.  Sorry Ned, I was distracted.  But then, this is what distracted me...

I suppose it's not so bad if my head is turned by another of Ned's pictures, and what a picture!  Almost two metres high and over a metre wide, it dominated a wall of Burne-Jones' beauties.  I had seen this picture lots of times in books but I couldn't remember the last time I saw it in person and it hit me like a smack when I turned the corner and found it.  The above image is my photograph (the Lady Lever, unusually, allow photography in the gallery.  I would love to have seen my expression when I found that out.  I think my eyes grew large and heart-shaped and I thanked them profusely before skipping back in to the hall with my camera in my hand).  Here is a better image of the painting:

This is one of the better reproductions you can get and even this cannot do justice to the burnished copper of the woman's hair, the fact her skin looks like ice-cream, and the sheer, muscled gorgeousness of the chap.  All is vibrant, scented heaven, pressed against you like the sigh of a lover.  Swoon!  Sorry, I'll pull myself together.

Anyway, I came home and immediately wanted to know more about the picture.  My tired brain knew that it was Phyllis and Demophoön, but that was it (I had just driven for six hours, even I have an off-day), although Phyllis was obviously that saucy minx, Maria Zambaco.

You will already know that The Tree of Forgiveness is a 'copy' of an earlier work by Ned, painted over a decade earlier...

The faces for this version were both based on Maria Zambaco, Ned's lover until 1869.  They had broken from each other and Maria's attempted suicide had caused a great scandal.  Ned had tried to stop his erstwhile mistress from drowning herself and by the time the police arrived, the couple were wrestling on the ground.  Maria had furnished herself enough laudanum to kill herself that way as well. It is likely that Ned's panic was not only to stop her hurling herself into the Thames, but also to stop her harming herself in any other manner.  The police were nearby, which was lucky (or unlucky, depending on your viewpoint), due to the number of suicides on that stretch of water, and collared Ned.  The whole scene was both sensational and extremely distressing for all involved, but it is interesting that Ned broke the relationship off when Maria asked him to leave his wife.  I get the impression he was attracted to her beauty, her 'otherness', but when it came to it, he wasn't about to be told what to do by anyone.

The painting he produced in 1870 was Phyllis and Demophoön.  Demophoön was a king of Athens who fell in love with the beautiful Phyllis on his way back from the Trojan War (he was in the actual horse and everything).  He married her, but had to return to Attica for six months, promising to come back to his wife.  Every day Phyllis went to the shore, awaiting the sight of sails but her feckless hunk of a husband had ended up in Cyprus and had forgotten all about her.  When six months came and went, Phyllis was filled with despair and hung herself from a tree.  The Gods took pity on her and transformed her into an almond tree.

Demophoön (far too high maintenance in my opinion) suddenly remembered he had a wife (I've met a few men like that) and hot-footed it back to Thrace, to his wife.  There he was informed that his uselessness had turned his wife into a tree.  Consumed by guilt (Today on Jeremy Kyle: 'All very well to feel guilty now, but I'm a tree because of you!') Demophoön embraced the tree which began to bloom.  Suddenly, awakened by her husband's remorse, Phyllis burst forth from the tree to forgive him.

Isn't that lovely?  In the original tales, Phyllis remained a tree and Demophoön fell on his sword and the suchlike, but Ned gave them a happy ending.  Or did he?

The 1870 original was very controversial.  For starters, Demophoön is a bit starkers.  I read a very interesting bit recently about male nudity.  Apparently it's fine as long as ladies can't see it (spoil sports) and Phyllis is quite up-close and personal with nude-y Demophoön.  Not even the fact that her feet are still a bit wooden defuses the fact that she is within groping distance of a chap's naughty bits.  Good Lord!

Also, Maria Zambaco was all over the picture; she was Phyllis, lunging towards her lover.  She was Demophoön, filled with guilt, asking for forgiveness.  She was the situation, the lovers, the neglect and the passion.  Her soft features shine from the couple, so close, so intimate.  When Ned painted the picture, their affair was over, but obviously his imagination still held her, still regretted, still wanted to make the whole sorry mess right.  The picture is often read to be about regret, but look at Demophoön's face.  I think it is also about fear.

When he returned to the subject a decade later, the resultant image was The Tree of Forgiveness.

Although the focus of the image, the title, is about forgiveness, the fear remained.  Demophoön doesn't look happy to see his beloved, or relieved that his lost love has returned.  He doesn't even look surprised that she has appeared.  He looks terrified.  This is especially strong in the 1882 version, as the figure of Demophoön has been 'beefed up', a greater contrast to the slight, creamy form of Phyllis.  He looks like he is trying to get away from her, but why?

Look at it this way - Demophoön had forgotten her, had neglected her and through his thoughtlessness caused her to kill herself.  Phyllis is a woman of action, she makes things happen.  Demophoön makes things happen through his inaction.  He returns to his wife and finds he has lost her, but then through her strength of love, she not only comes back to life, but transforms back from a tree.  He awakens a superhuman passion in her that makes the impossible happen.  He inspires but she achieves.  The strength is hers, he is simply the focus.

In 1879, Maria Zambaco returned to London.  For a decade, Ned had not seen her.  He had slowly pieced his life together after his affair that had almost cost him his wife, family and reputation.  In 1869, he had tried to end the relationship, but she had tried to kill herself, a rather more dynamic action towards ending things.  Ned had stopped her from ending her life, but as they had roughly embraced on the pavement outside Browning's house, the police thundering to their aid, he must have known the power in the relationship was not his.  By 1879, Burne-Jones had grown in reputation, but none of that mattered because the woman who had ruled him could have destroyed him again as quickly.

Heaven knows what Georgie Burne-Jones thought when she saw Maria's face, large as life, on the intense canvas.  I expect she had long since turned a weary blind eye to Ned's fancies, but the timing of the revisit makes me wonder if she drew the same conclusion: Ned was frightened of Maria.  To be the focus of another's love when you love them back is beautiful, but when you don't return their love, it's terrifying.  It is suggested that Ned changed the story to give it a happy ending, the couple reunited, but what if Demophoön had been too weak to say no to Phyllis face to face?  If by going and staying away, he was getting rid of a wife he didn't want.  To his credit, he was sad when he found she had killed herself but then, all of a sudden, she comes back to life.  You can run, you can hide, you can even kill her, but she will just keep coming for you.


Phyllis' hands are clasped around him and she presses to him like she wants to become one with him. Their bodies echo each other and despite his muscles, he is definitely looking in the weaker position, not least because his hands seem to scrabble away, unaware that the almond blossom has surrounded him.  There is no escape.

It is said that Burne-Jones learnt his lesson from the original work and draped Demophoön to preserve his modesty.

Another way of looking at it is that the pale drape comes from Phyllis, curling around his vitals.  Arguably, what Burne-Jones had sought and received from Maria was not essentially love, but head-turning, heart-racing lust.  He didn't love her enough (or Georgiana too little) to run away to Greece with Maria, so his heart wasn't hers.  An entirely different part of his anatomy had ruled him, Maria had grasped him by it, and possibly that is what he is saying with the mystic swirl.  Also, it could be a reference again to the power difference between them.  She had unmanned him, literally, left him without the signs of his masculine strength.  All of a sudden he is physically as featureless as her, but he's not the one exploding out of a tree.

I have to admit, my past reticence to embrace Burne-Jones to my bosom has been due to his affairs, his wandering eye and the utterly rubbish way in which he handled it all.  The Tree of Forgiveness says that maybe Burne-Jones was as horrified by his actions as I am.  We all make mistakes, some of them disastrous both for us and others, but often the wreckage we make is unintentional (if not in action, then in outcome).  I think that this painting is Burne-Jones' admission that he got it horrible wrong.  I get the impression that he had entered the relationship completely blind to the needs of his lover, but that he had been punished by foolishly underestimating her power.  The repetition of the image on Maria's return to London shows that maybe that lesson had not been forgotten and was still greatly feared.

I now feel comfortable to sit next to Ned and nod sympathetically at admissions of human folly.  Ever the master of understatement, the original work in 1870 was exhibited with a quote from Ovid: 'Tell me what I have done?  I have loved unwisely.'  You have to wonder, out of the two figures, who exactly is speaking the words. 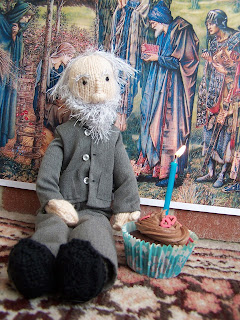 Happy birthday, Ned.  We love you.  Wisely, I hope.


Posted by Kirsty Stonell Walker at 16:12