The Endymion Tennyson Part One: The Art of Titles

As part of my Masters in literature, I gleefully studied the poetry of Alfred, Lord Tennyson.  All very run-of-the-mill literature comprehension, but also they had a section on book history, so we had to go out and buy an alternative edition of Tennyson’s poems, then comment on how the ‘product’ impacted our experience of reading the book.  I have to admit this totally changes the way you view a book, and is one of the reasons that I am unwilling to go electronic in my consumption of the written word.  I’m the same with downloading songs, in fact it’s a miracle I ever gave up vinyl.

I visited one of the many second-hand book shops of Portsmouth and found a rather battered, turn of the century edition of selected poems, illustrated by Eleanor Fortescue Brickdale.  I was familiar with Brickdale’s work, having come across some of her more well-known pictures, but hadn’t really given her a great amount of thought.

Then I saw the Endymion Tennyson.

The sheer volume of her illustrations, from full page to small pictures, titles to the end papers is mind-boggling.  I would like to dedicate the next three posts to a celebration to this one book and the work Brickdale did to create this amazing picture book.  You can buy copies of it on Abebooks still - it is available with coloured pictures, but I have to say I prefer the black and white line drawings for their simplicity and immediacy.

I will start with the presentation and title pictures.  Feel free to make ‘yummy’ noises as this is utterly delicious. 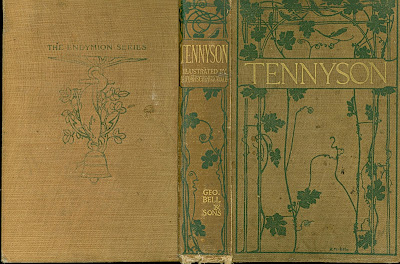 I loved the cover with the growing vines curling up it.  I have other Tennysons, but they tend towards the more ‘important poet’ end of the scale, with blue and gold covers.

This is more in keeping with the Tennyson I love, the ‘Lady of Shalott’ era of Tennyson when he was a little off-centre and less sacrosanct as the Laureate.  The endpapers are beautifully monogrammed with ‘AT’ for Alfred Tennyson, again with no deference to his title or reputation. More ‘Nouveau’ organic decoration frames and repeats on the inside-covers, as if no page could be left undecorated.

In case you were in any doubt, a personification of music and poetry graces the opposite page to the title, reminding me of Kate Bunce's Melody (1895).  In other editions, there is often a picture of Tennyson, either as a sketch or a photograph, but in the Brickdale edition, a goddess of the arts, flanked by the initials ‘AT’ again welcomes us in. 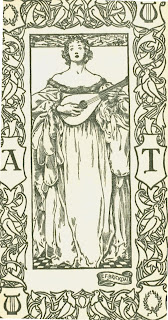 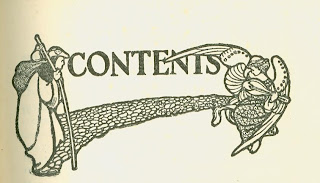 One of the joys of this edition is that Brickdale seems to have felt the need to illustrate everything, even when it frankly made no sense other than for the pleasure of seeing one of her drawings.  Above the contents list, blocking a little of the title, is a traveller, being comforted on his journey by a heavenly musician.  No doubt this is a metaphor for the reader, helped through life’s journey by the beauty of Tennyson’s verse.

Brickdale followed a traditional mode of illustration for some of the poems, providing full page images depicting scenes from some of the works, but she also sometimes presented the title as an illustration in its own right. Among the delights on offer are both a mermaid and a merman: 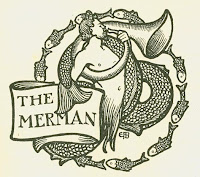 The Medieval romance of 'The Palace of Art' and 'The Princess': 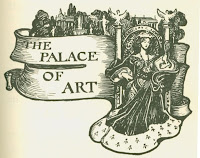 And the Briar Rose-esque Sleeping Beauty for 'The Day Dream': 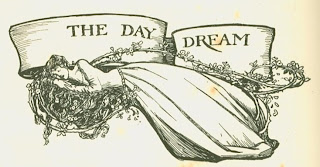 Although I am familiar with the illustrations Rossetti did for the Moxon Tennyson, I never really considered if any of his later paintings were Tennyson inspired, but of course, you have to wonder about The Daydream...

I’m not convinced the picture is based on the poem, although 'The Day Dream' does seem to sum up Rossetti’s attitude to Jane Morris when he painted the above image. 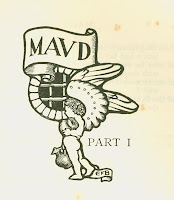 For 'Maud', the first illustration provides a rather generic ‘love imprisoned’ image, but Part II is marked by a superbly dramatic Revenge and Love themes split heart.

I think a contender for my favourite illustration from this volume has to go to 'Break, Break, Break'.  I’ve seen this shown in rather a lack-lustre manner, for example in William Linton’s more traditional ‘stormy beach scene’, but Brickdale’s illustration has shades of the Hokusai Great Wave, the title being obscured by the rough tide.

In my next instalment I will show you some of the random motifs that litter the volume of poems for no other reason than they are beautiful and Brickdale seems to have got over excited at the end of most of the poems and shoved in a little drawing just for the fun of it. See you tomorrow…
Posted by Kirsty Stonell Walker at 22:38